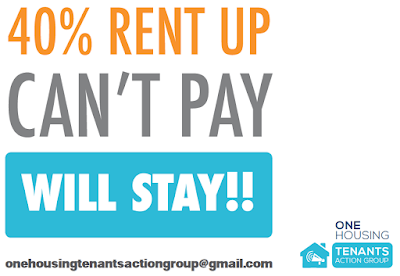 "The Housing Crisis in London has over the past decade developed and manifested in a variety of forms.

From homeless citizens robbed of their rights to squat the plethora of empty residential properties that litter gilded neighbourhoods of London’s ‘jet setting’ elite, to the decanting and levelling of social housing built decades ago, mostly by local councils, to accommodate the contradiction that has always defined London as a world class metropolitan centre, i.e. the rich living across the road to the poor.

Recently an interesting episode of this drama has unfolded in Newham. The borough is home to the London 2012 Olympic stadium (now West Ham United football club’s home ground) andmany other venues that hosted athletes during the hot summer of 2012. Housing Association - One Housing Group Limited (OHG), a registered social Land Lord, issued Rent increase letters to ‘key worker’ residents (teachers, nurses and emergency service workers) in February this year. The increases were in some cases 40% and there were also changes to the tenancy agreement (1 year contract, 6 months break clause and 2 months’ notice period). The deadline to agree was 1st April 2017 (it was no joke!). It became clear to residents OHG had been planning this in advance because letters were issued in January 2017 that aggressively directed renters to switch from Standing Orders to Direct Debit. The loss of control over rent payments would make it easier for OHG to impose the new higher rates and collect them with as little resistance as possible.

Immediately resistance, to the 40% rent increase and changes to tenancy agreements, was organised. This started off with a group of keyworkers getting together, meeting in each other’s homes, to organise action. From the start there were differences over the approach to take. This took shape in the form of two poles of attraction. One group insisted on launching legal action through individual grievances (but paid for collectively). Another group favoured collective struggle – direct action supported by trade unions, knowledgeable fellow strugglers from outside and friendly councillors.

To cut a long story short, it was the collective struggle tendency that won the arguments and immediately car park meetings were held,an action group launched named One Housing Tenants Action Group and officers elected. A public meeting for tenants and supporters was organised in March 2017 which included representatives from trade unions Unite, Unison and NUT. There was also support from Labour Counsellors such as John Gray and John Witworth and journalists from local press like the Newham Recorder.

It was in the weekly meetings that a letter to OHG was put together and a petition launched. A day of action was called for 6th May 2017 outside the offices of OHG in Mile End. Slogans were voted on: “rent up 40% won’t pay will stay!” and “One of us is all of Us!”. Press releases were sent out and call outs for solidarity issued. Just before the day of action a representative from OHG got in touch with the Chair and Secretary of the Action Group (Truus and Tawanda) informing us that the planned rent increases had been cancelled. The OHG representative also requested that the day of action be called off and talks begin as soon as was practicable. We saw this as a significant change in OHG’s posture and confirmation that our strategy of refusing to pay the new rate and organising collectively and very publicly got the result we wanted. The day of action was called off and a meeting was held with OHG.

Since then, the tenants have formed a Residents Association (OHG West Ham and Canning Town Tenants & Residents Association). We have held regular meetings and the officers of our association have made links other OHG tenants associations. We have also reached out to other housing struggle groups. Our efforts were recently rewarded when ‘rent decrease’ letters were issued to some tenants by OHG on the 1ST of September. It was only through collective struggle with our friends and unions that we are still in our homes and looking forward to a more secure future".

(the TRA are happy for this statement to be posted in full elsewhere on social media)
Posted by John Gray at Wednesday, December 20, 2017