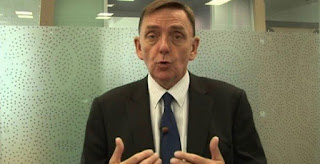 Hat tip Dave Hill's On London blog
"Sir Robin Wales has asked the Labour Party to cancel the outcome of the internal selection process that saw him endorsed to seek a fifth term as Mayor of Newham following a campaign by local members for an investigation into its conduct.
An affirmative nomination or “trigger ballot” held in the autumn of 2016, saw Sir Robin prevail by 20 votes to 17, and Labour’s governing National Executive Committee (NEC) has resisted calls by party members in Newham, including ten councillors, to look into what they described as “many failures of process/propriety and procedural irregularities”.
But now Sir Robin has told the Newham Recorder that although the trigger ballot outcome was confirmed by the NEC, legal action against it by some of the complainants had prompted him ask for it to be quashed because “the costs of a court case would be significant and Labour Party members’ money should not be used in this way”.
Sir Robin’s initiative came after those pursuing the legal action secured the funds they required to move to the “statement of claim” stage, setting out the grounds for their case that their party has “behaved improperly” over the trigger ballot, both locally and nationally.
A letter to the NEC sent in January signed by 47 Labour members, including 10 councillors, argued that seven of the votes cast in favour of Sir Robin going forward automatically as Labour candidate for next year’s mayoral election rather than facing potential challenges from other hopefuls had been dubious and that there had been inconsistencies in the way unions affiliated to the party locally had been enfranchised.
Each of Newham’s 20 ward branches had a single vote in an electoral college, which also included 11 affiliates, seven of which were trade unions. The branches voted by 11 to nine against Sir Robin progressing without a further contest, but the balance of affiliates’ votes gave the incumbent the majority he needed.
A review by the Fabian Society of the approach taken by its Newham branch to deciding which way to vote found that it had “breached the society’s rules” in coming to its decision to back Sir Robin’s automatic candidacy.
It has been established by On London that the headquarters of Bectu, one of the unions with a local affiliated branch at the time of the ballot, cannot confirm that an affiliation fee was paid for the relevant year. (For unrelated reasons, Bectu is no longer affiliated to Labour).
On London has also learned that the ballot paper for an affiliated branch of the TSSA union was conveyed directly to an officer of that branch by a councillor who is a member of Sir Robin’s mayoral team rather than being sent initially to a more senior figure in the organisation, as appears to have been the case with other unions. The TSSA vote was eventually cast in favour of Sir Robin.
One key point of the dispute has been whether Labour party rules entitle each affiliated union branch to vote separately in mayoral trigger ballots or whether just a single vote per union should be accepted, regardless of how many different branches are affiliated locally.
Not all the unions involved interpreted the rules in the same way, resulting in Unison casting just one vote – against Sir Robin going forward automatically – despite having six branches affiliated, whereas the GMB – which supported Sir Robin – cast four votes, the CWU cast three and Unite cast two.
It is understood that an audio recording, heard by On London, which those who have been seeking an investigation believe reveal an ally of Sir Robin disclosing questionable conduct concerning the trigger ballot process, has been sent to a senior Labour Party official.
In his comments to the Newham Recorder Sir Robin says he is “supporting a new process to be undertaken under the auspices of the national or regional Labour Party”. The complainants have criticised the involvement of at least one member of Sir Robin’s mayoral team in the running of the process.
Any decision by the party to instigate a fresh trigger ballot or to hold an open selection contest will entail settling on a “freeze date” in advance of which members and affiliates will have to had have had their documentation in order to be eligible to vote.
Since the completion of the original ballot, the GMB has affiliated 26 branches to West Ham constituency Labour Party in Newham, each of which would have a separate vote if a freeze date subsequent to their affiliation were set and multiple votes per union again accepted.
Read all of On London’s coverage of the Newham mayor trigger ballot dispute via here.
Posted by John Gray at Friday, December 22, 2017