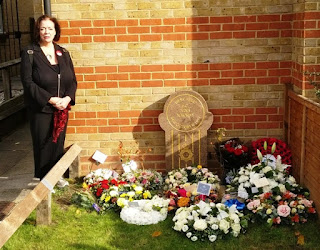 This is an article written by our West Ham MP, Lyn Brown.  Seen here at the memorial to PC Nina Mackay. Over the Christmas and New Year holiday not only will public service workers be looking after us 24/7 but many of them will face abuse and violence while doing so.

"Being the Shadow Minister for Police and Fire services was the highlight of my Parliamentary career so far. I met truly dedicated and amazing people, many of whom are real heroes.

Their bravery and commitment to the public good is plain to see, following the dreadful spate of terror attacks this year and the horrific Grenfell Tower fire: workers risking their lives to save the lives of others.

That’s why I supported MP Chris Bryant’s bill to “Protect the Protectors,” ensuring that those who menace or attack our firefighters, nurses and police officers receive appropriate sentences to deter their appalling crimes.

When I sat in Moorfields hospital a couple of weeks ago, alarms sounded three times to warn of attacks on staff and summon help. Figures from Barts NHS Trust show their nurses, doctors and support staff were assaulted 120 times in 2015. The police face the same hazards. Nearly three thousand Met officers were assaulted last year, though the true number may be much higher.

Our emergency workers shouldn’t have to expect such abuse in the course of their duties. Nor is work-related violence the only threat to their wellbeing. Time and again, I hear first hand of the stress caused by demands to do more with less. Recently, a West Ham officer’s wife told me he faces a repetitive scenario of working late, without lunch breaks; being short staffed, leaving him exhausted, and working against the odds to safeguard us, his colleagues and himself.

Their families, too, face the strain of making ends meet, while prices continually rise and pay flat-lines.

Our police have more crimes to solve, with fewer officers. Our NHS has to treat more patients, without the right funding.

Theresa May should stop pretending everything is fine and start funding our public services properly.

Only when they’re given the support, time and resources they need, will emergency services’ staff receive the dignity and respect we owe them.

So, “Protecting the Protectors” is only the first step to improving the lives of those who risk everything for us, every day".