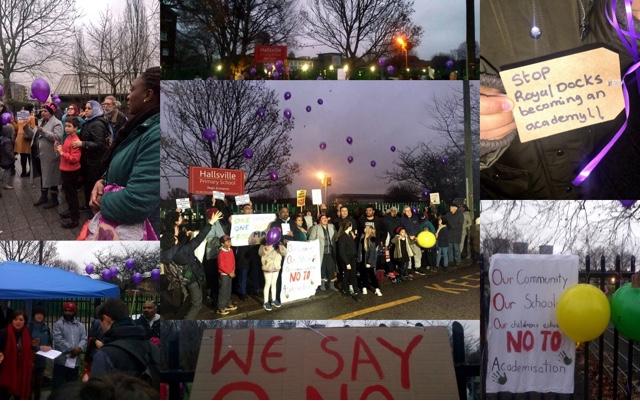 Photo college from protest outside Hallsville Primary School on Wednesday evening against the Academisation of our schools. The protest followed strike action in Avenue and Royal Docks School.

I spoke at the protest as did other Councillors such as Cllr Rokhsana Fiaz, unions, retired teachers and parents.

I made it clear that Academisation is privatisation and will result in the pursuit of profit not excellence. Low paid school staff will have their terms and conditions slashed while top managers get massive pay increases. Children will treated as commodities not pupils.

Nearly all schools in Newham have been transformed and are achieving excellent results. We do not need privatisation. If it is not broke don't fix it.

Newham Council must raise its game and do everything it can to support its education establishments to remain in the Newham family of schools.