Why can't we have beneficiary representation on our £217 billion in LGPS pools? It is our money! 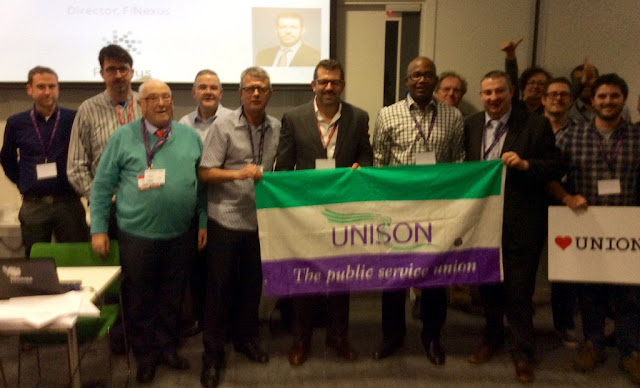 The Local Government Pension Scheme belongs to some 5.1 million Brits who are the legal owners of its £217 billion of assets. The scheme assets are being merged nationally into one of eight new "pooled" schemes but only one of these pools have made any plans for beneficiaries (owners in law) to have any representation on the boards of these pools whatsoever.

This is, of course, a complete and utter nonsense, is probably illegal, certainly divisive and definitely bad practice and seriously bad governance. Beneficiary representation was brought about in pensions to prevent fraud. Never forget that there is no Crown promise for the LGPS nor any Pension Protection Fund.

See below a well made argument by UNISON LGPS Member representative, Colin Lomax, to his Council Pension fund (Dorset County) about governance at their new "Brunel Pool" and why the pool should have beneficiary representation.

Picture is from the UNISON Local Government Pension Scheme seminar last week when we had over 120 LGPS Members representatives attend (including colleagues from GMB and Unite).

"Since the last meeting of the Committee, we have had a presentation on the Brunel Pooling Proposal here on 7th October when concerns were raised at the lack of provision of representatives of scheme members on any of the Brunel Pooling governance arrangements and that this was a serious omission. I attended a similar event at Keynsham on 14th October and raised the same issue there. The response I received was that this could be arranged on an observer basis and I indicated that this would be acceptable provided such observers had the right to speak.

The reports we have today make no mention of scheme member representation and I can only assume that the officers are so tied up with the details that they have failed to take this into account.

We have had TU representatives on this Committee since around 1988 and Roberto himself has been a continuous member since then, a period of around 28 years, more than any member or officer here present. My own period of such service is just 13 years.  The contributions we have made in that time have been welcomed, certainly by members, and we shall have a continuing role on this Committee in the future, albeit in a diminished capacity as we acknowledge the advantages of the pooling arrangements in reducing costs.

The Editor of Engaged Investor writes:

“The case for (scheme) member representation on the boards of pension schemes is difficult to argue against.  Involving savers in the governance of their funds improves oversight, confidence and trust, and ultimately makes it more likely that savers will get the results they want.”

“In the defined benefit world this is common-place – member nominated trustees were part of the answer to the Robert Maxwell pensions scandal”.

Both Roberto and I are members of the Association of Member Nominated Trustees.

“They’re brilliant in so many areas, they ask difficult questions that other people might be frightened to ask”

“Every board I chair is enriched by having (scheme) members on it and it would be a very sad day if we sat there with just professionals running the scheme in a very arm’s length way.”

LGPS is not a trust-based scheme as such.  It is a statutory scheme, but even that has its risks in that the Government can (and has done) change it.  Certainly there is now a greater emphasis being placed on elected members acting as trustees and professionals also acting as trustees, which makes it more like a trustee based defined benefit scheme.

It is not illegal for the BPP to appoint scheme member representatives to any Board.  Marcus Jones MP, the Minister charged with approving these new pooling arrangements, in the Parliamentary Debate called in response to a petition signed by over 100,000 scheme members, held on 24th October, 2016 said

“I assure Hon.Members that there is an opportunity for trade union representatives on pools.  That is a matter for the individual governance arrangements, but the individual local authority members that support each scheme will have the right to be part of setting up those pooling arrangements, and it will therefore be their decision on whether trade union representatives are on their pools.”

Already we know of two of the new pooling partnerships that have included provision for trade union representatives to sit on oversight boards.

There were other issues which were raised in the parliamentary debate.  There was general support for pooled arrangements but criticism of the way the Government has handled the issue and criticism on it seeking to direct how funds are invested.  It was emphasised that “funds must be invested in the best interest of their (scheme) members, as European Directives lay out”.  Article 18 of the European Directive on Institutions for Occupational Retirement Provision also states that “Member States shall not require institutions to invest in particular categories of assets”.

There is no doubt that the Government has rushed through these measures and that the pooling arrangements have entailed a considerable amount of work by officers working for the 10 constituent partners.  In so doing, they have ignored the wishes that have been voiced on behalf of scheme members, whose assets are being held and invested on their behalf.  I would hate to say that this has been deliberate, but it is now vitally important that this omission is corrected.

We cannot recommend the Committee nor the Council to approve the recommendation in the report without an assurance, indeed an undertaking, that the Committee recommends the County Council to support the principle of trade union representation, with speaking rights, on Oversight Boards, before this submission is formally made to Government.