Mayor of Newham issues public apology to Travellers and Gypsies 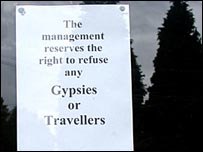 "Comments made by the Mayor of Newham were said to be "racist". Sir Robin Wales has formally apologised to Gypsies and Travellers for making comments deemed to be “casual racist banter” at a council meeting.

The Mayor of Newham said he was “sorry for the distress caused by my comments, how they came across and how they were interpreted” in a letter to the London Gypsy and Traveller Unit (LGTU).

The apology, released via Newham Council, referenced offensive remarks made during a conversation between mayor Sir Robin and deputy mayor Lester Hudson at a cabinet meeting on March 17 relating to new accommodation sites for Gypsy and Traveller communities.

Before approval of an agenda item which stated “no need has been demonstrated for new gypsy-traveller [sic] accommodation at the present time”, deputy mayor Lester Hudson asked if he could have the addresses of the objectors.

Mayor Sir Robin Wales replied: “I think what Lester is saying is that we would be very happy to set up a site right next to their house.”

Debby Kennett of LGTU, who at the time called the remarks “casual racist banter”, said she accepted the apology.

She said: “We welcome this statement from the Mayor of Newham finally apologising publicly for the offensive remarks made about the Gypsy and Traveller community at the cabinet meeting.”

The joint-CEO said she was also pleased with Sir Robin’s written personal assurance that “the Parkway Crescent site will remain a permanent site for Gypsies and Travellers and the council is committed to ensuring it will be protected from any future developments in the area” in addition to a “full review” being undertaken of the housing needs of the settled Gypsy and Traveller community.

She said: “We trust that these commitments will result in tangible and positive change for Newham’s Gypsy and Traveller community.”

In his letter, the Mayor of Newham wrote: “The discussion at the cabinet meeting between the deputy mayor and me was primarily to understand more about objectors to our approach.

“We wrongly believed at the time that those objecting to our strategy were opposed to a Gypsy and Traveller site in Newham, however the objectors were the LGTU and we apologise for any confusion.”

He added that the council “has previously established an authorised public site for Gypsies and Travellers” with detailed analysis of its groups and that “other local authorities could learn much from Newham’s approach and should do much more to help these communities”.

The Newham mayor finished his letter stating: “We want to continue to work with the local Gypsy and Traveller Community so they continue to have a sense of belonging in Newham.”

This report relates to this article last week in the Newham Recorder. While I am glad the apology was made, I am concerned about why these remarks were made in the first case and why it took so long for the apology to have been made.

Check out the original report in March here.
Posted by John Gray at Monday, December 19, 2016