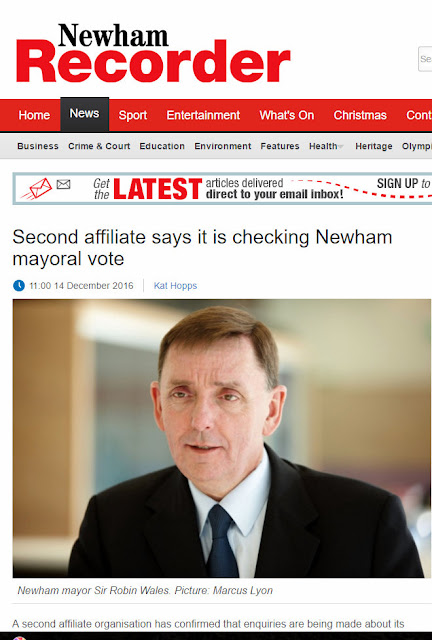 Check out latest report in the "Newham Recorder". Tonight at my Councillor surgery I had angry and upset residents coming to see me about what they believe to be a "rigged" Mayoral trigger ballot.

"A second affiliate organisation has confirmed that enquiries are being made about its voting process following Sir Robin Wales’ reselection in the Mayor of Newham 2018 election.

However, a source close to the transport union told the Recorder: “A complaint has been made to TSSA that a TSSA branch may have voted in East Ham Constituency Labour Party without the necessary affiliation requirements being in place.

“TSSA will now conduct an inquiry into the matter and report any irregularities to the relevant authorities should it prove necessary.”

A spokeswoman for TSSA confirmed enquiries were underway but didn’t wish to comment further.

The Recorder has been informed that the complaint made concerns about the eligibility of the TSSA branch in Newham.

It is allegedly not allowed to vote because the annual application fee for 2016 has not been paid and the executive branch was not officially informed of a vote taking place.

The controversy follows the Fabian Society’s acknowledgement last week that it is “seeking further information” about its vote.

Members complained a “yes” vote had proceeded despite the society’s Newham branch not having met for four years.

Sir Robin Wales’ victory in the trigger ballot centered on affiliated organisations – comprising trade unions and socialist societies – which voted 11 to 6 in favour of keeping him.

In contrast, 11 out of 20 Labour wards voted for a choice of entrants.

A spokesperson for Trigger Democracy, which campaigned for an open selection process, said “this is now the second affiliate vote that appeals to be unravelling under scrutiny”.

They said: “The mayor ignored the democratic will of members in favour of these votes from affiliates which are now being called into question.”

A representative for Sir Robin Wales was approached for comment but declined to say anything.
Posted by John Gray at Wednesday, December 14, 2016