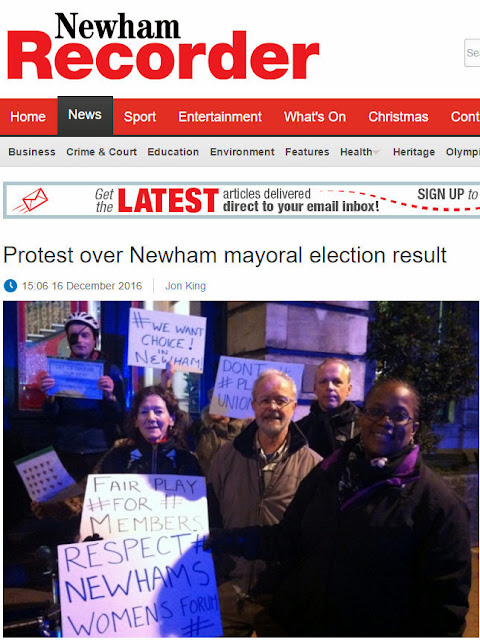 The report below is from this weeks Newham Recorder about the lively but peaceful protest outside the Mayor's Christmas Party at Stratford Town Hall. I stopped and spoke to the protesters about why they were there and what they thought should happen. They said they were outraged at what they see as a "fraudulent" and "rigged" election process. I knew many of the 30 protesters who come from all parts of Party. Most were long standing party loyalists. I tried to reassure them that the Labour Party would investigate their complaints fairly and properly.

"Campaigners protested outside a council party last night to voice their anger following the reselection of Sir Robin Wales as the Labour candidate for the 2018 Mayor of Newham election.

The action was staged on the steps of the Old Town Hall, Stratford, where Sir Robin and councillors were gathered on Thursday.

About 30 people stood in the street calling on Sir Robin to consider his position and allow other candidates to be involved in an open selection process.

Tahir Mirza, Labour party secretary for Little Ilford, said: “I joined this protest because Robin Wales has lost the confidence of the members.
“He lost 11 wards and just won nine. He has split the party. It’s very important to go to open selection.”
Protesters also expressed their anger after the votes of affiliate organisations swung the ballot in Sir Robin’s favour, with claims some voted even though they had failed to pay their affiliation fees to the party.
“The idea affiliate organisations which haven’t met in years can have such a big part in democracy in Newham is shocking,” Stuart said.
The group want Sir Robin to recognise a concern among Labour members and residents that by holding out he is damaging the party.
Standing out in the cold, they made an appeal to the mayor’s sense of fairness to allow an open process, calling on him to stand on his record alongside other candidates.
“He should step down to ensure an open selection takes place,” Tahir said.
“Any irregularities are going to be damaging to the Labour party. It seems like he’s the one who’s going to divide the party.
“He should’ve come along. He knows he has lost the confidence of our members.”
But a steadfast Sir Robin remained inside the town hall throughout the protest, refusing to answer his antagonists’ calls to join them.
And Stuart, 46, asked: “What’s he afraid of?”
A Newham Labour Party spokesperson was approached for comment by the Recorder but declined to make a statement".
Posted by John Gray at Saturday, December 24, 2016