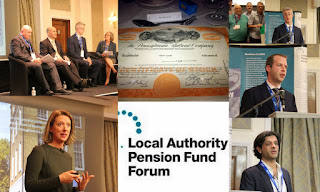 Last week I went to the annual conference of the Local Authority Pension Fund Forum (LAPFF).

I missed the first day (Wednesday) but below is an excellent report on the day by guest blogger John Walker who is a UNISON member and sits on the Cambridgeshire Pension Fund Committee as a Member nominated representative. I will post his other reports later.

"REPORT OF LAPFF CONFERENCE on 7th/9th December 2016 at The Marriott Highcliff Hotel, Bournemouth

This year’s LAPFF Conference was extended by half a day and so commenced at 2.00pm on the Wednesday.

The Wednesday afternoon session featured two topics that were current in the light of recent developments in the LGPS world beginning with a session on Infrastructure Investment entitled ‘Are funds getting it right?’ The first speaker from the Greater Manchester PF said that his fund were investing in Biomass, Wind Farms and Railways which involved having representatives on the Boards of those Companies.

The second topic was entitled Investing4Growth and featured a variety of speakers setting out investment opportunities in Private Equity and Alternative Investments. These included a very interesting presentation from Cheyne Capital on its Social Property Impact Fund. He began by pointing out that the population of the UK would grow by a further 10 million in the next 25 years into a situation where there was already insufficient housing – and growing year on year.

Successive governments of all persuasions have failed quite deliberately to ignore the affordable housing requirement and the combination of depressed wages growth and increasing prices (especially in local authority employed staff) has grown to crisis proportions. He suggested that with housing stock built to last 30/40 years coinciding with the length of provision of pension funds makes this type of investment a ‘perfect match’.

The afternoon concluded with a speech by the Shadow City Minister Jonathan Reynolds MP who is a member of the all party Commons group on Pensions who paid tribute to the work of the LAPFF".
Posted by John Gray at Monday, December 12, 2016