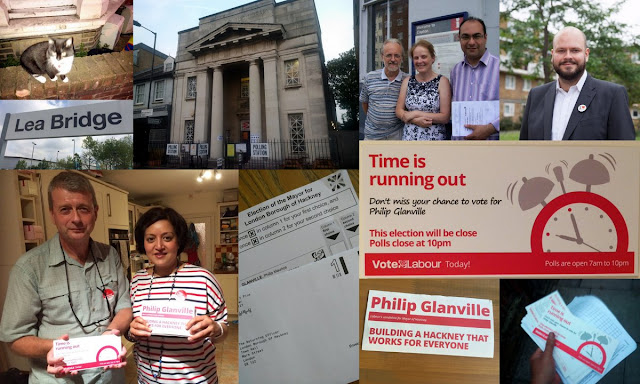 Tonight I helped out in Lea Bridge ward, Hackney for the election campaign to select a new Executive Mayor for the Borough. The Labour Candiate is Philip Glanville.

At the campaign headquarters, ward activists were really hospitable and appreciative to us for turning up and very pleased to get help from outside Hackney.  It was a shame that more activists from Newham did not turn up to support our sister Borough. I must try and find out why?

Personally, while I do not think that the Executive Mayor model is best for Unitary Council authorities (and have my doubts about regional mayors) I still want a Labour Party candidate to win (and then reform the system).

See picture of Cllr Rokhsana Fiaz and myself (bottom left) at the Ward campaign headquarters before we were sent out to deliver "Time is running out" reminder cards to local residents.

By complete and utter coincidence the first door that Rokhsana knocked on was answered by someone we both know from Newham as an expert advisor on LOBOs!

I will update the post when I find out the result of the election.
Posted by John Gray at Thursday, September 15, 2016