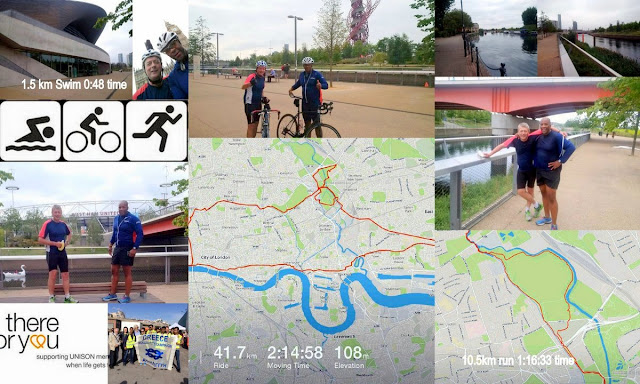 Picture from Sunday, when fellow Newham Councillor, Terry Paul, and myself completed a self organised Triathlon (using google maps) starting and ending in the Queen Elizabeth Olympic Park, Stratford, London.

This was not a race and there was no mad scramble and frantic quick change transitions unlike the 2014 London Excel Triathlon which we both previously took part in. It was long and tough but pretty relaxed and not competitive. The weather was perfect too.

We started off at the magnificent London Aquatics Centre in the centre of the Olympic Park. We swam there for 1.5k (30 x 50m), I did it in about 48 minutes, Terry was a bit faster. We then went on our bikes for a 40k cycle via Victoria Park, Regents Canal (too busy), the City, Embankment to Big Ben at the Houses of Parliament (which is always glorious) and then back along the CS3 route towards Barking (fast but noisy). The final stretch along the Newham Greenway was lovely. It took 2:14 and we actually did in total 41.7k.

The final part was the 10k run. We ran (slowly) up the River Lea Navigation and back along the original River Lea. We stopped to read the historical and nature signs and finished in 1:16. We started and finished together.

We were overall pretty slow but I enjoyed it far more than in 2014. We did seriously even think of stopping off for a coffee at Big Ben (and perhaps we should have). I have done two marathons in the past and felt destroyed and unwell at the end of both of them. I have felt exhausted at the end of both triathlons I have done but not destroyed and was able to cycle home.

Terry and I are thinking of this being an annual event each September. We will change the routes but if you want to take part, let us know or watch this space.

Many thanks to my wife,  Gill for being the anchor woman and looking after all our stuff
Posted by John Gray at Wednesday, September 21, 2016