Jeremy is going to win the Labour Leadership Contest: Get over it. 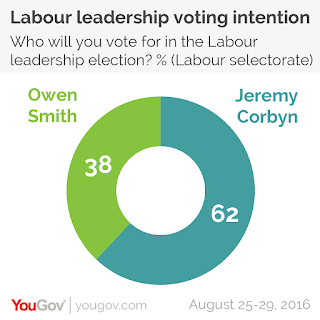 While one of the reasons why politics can be exciting is its unpredictability at times, there seems little doubt that Jeremy Corbyn will be announced the winner at the special conference on Saturday 24 September.

The latest YouGov poll predicts an even greater majority for Jeremy this time than last year 62% compared to 59.5%. A massive 38% majority. 52% of Party members, 70% of registered supporters and 54% of trade union supporters. YouGov have apparently made very accurate predictions of such contests in the past.

So where do we go from here? I think the only way forward is for the Party to unite around Jeremy and for everyone to recognise that he has earned the right to lead the Party into the next general election.

This doesn't mean that Jeremy and his advisers do not have to recognise that they have made some huge mistakes and need to raise their game. I know of a number of genuine left and progressive Labour MPs, who felt they were completely let down and undermined by some of his team. But equally his critics need to understand that they have fought their corner and lost again. Badly.

Some might well consider that another leader could win in 2020 (or sooner) but unless Jeremy chooses to step down, Labour would just implode in a civil war and would definitely lose. Voters hate a divided Party.

If you think that the problem is Jeremy's policies rather than his leadership (which I think is truthfully the case for most critics) then unless you (in your terms) hold your nose and give him support, if he is defeated at the next election, then the blame would be laid against you for disloyalty and division rather than his policies.

Lets face facts that the next general election will be really tough for Labour to win whoever is in charge of the Party. While Theresa May's PM honeymoon will not last for ever and the Tories could still destroy themselves over Brexit, it is far more likely that their gerrymandering over electoral registration (a million voters off the register) and Parliamentary boundary changes will cost any Labour leader very dear. Scotland is also still a disaster for Labour and it is clear that many of our core vote do not agree with our perceived metrocentric bias against Brexit.

Increasingly, I think the only way we can win the next general election is to think out of the box and present a genuine alternative economic and social agenda. While I don't agree with everything that Jeremy has said and done, I have never seen so many people become engaged and enthused by his politics and his policies. The historic home of the Labour Party, West Ham CLP (I am it's Vice Chair Membership) has grown from around 450 to nearly 1990 members. The overwhelming vast majority of these new members and supporters are not from the tiny UK ultra left but ordinary people who just want change.

If the Party can enthuse the wider public in the same way Jeremy has done with our new membership then we can win and win big. So lets go for it. Lets put aside the awful abuse and sectarianism in recent months by all sides and unite around attacking and defeating our common real enemy - the Tories.
Posted by John Gray at Saturday, September 10, 2016