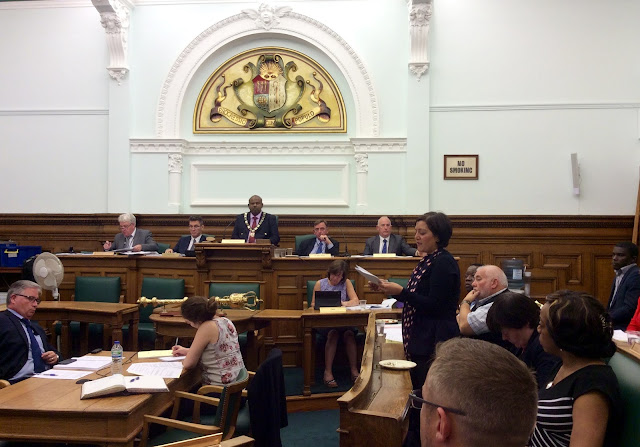 "Brexit and the New Age of Uncertainty:  Implications, challenges and opportunities for Newham, London and our country"

"Thank you Chair for allowing me the opportunity to address colleagues at today’s Full Council.

I’ll be talking about the implications of Brexit as I see it; and a new age of uncertainty that we have entered. Sketching out my thoughts about what kind of response we should offer as Councillors and leaders in our communities.

It’s been a tumultuous three months since that morning when we woke up to the reality of Brexit.

A rude interruption to the business of how we do politics in this country, which exposed deep-rooted anxieties about who we are as a nation.

Some here may have been lukewarm about our membership of the European Union. The results in Newham certainly reflect a deep-rooted hostility to the European project in some quarters.

The obvious point of contention for them has been the issue of the free movement of people.

No doubt many here have overheard conversations about immigration tinged with casual or explicit racism. Though others have participated in valuable conversations about the impact free movement is having on our populations and services with sensitivity.

Since Brexit, we’ve also observed a worrying rise in racism and xenophobia against immigrants. Only a few weeks ago, some mere 23 miles away from this chamber, a polish man was murdered in Harlow in what police believe to be a suspected hate crime in this post-Brexit period.

In my neck of the woods, Custom House, membership of the European Union and immigration has been a motif for all sorts of ills in the minds of some of my residents: from fly-tipping, to housing shortages, lack of jobs and diminishing prosperity as they experience it.

At a national level, the doom and gloom scenario proffered in the immediate aftermath of the Brexit vote has been averted. But we should not get too complacent. There remain serious risks of a recession, despite the assurances the government is giving.

So while we’ve been watching Teresa May’s government wrangle about what form of Brexit Britain will opt for - maintaining the best possible links to European markets or going full hog with a ‘clean break option’ so that we can trade freely around the world – this all depends on whether the Europeans and the World Trade Organisation will allow either option.

In Newham, in London and across the country we are still absorbing grave assessments of the future. In workplaces and on the streets there is a new mood of unease.

Much of our current mood of uncertainty has specific causes, which Brexit has simply amplified. Some of it is due to the consequences of the 2008 financial meltdown and its effects such as zero hour contracts and the politics of austerity.

So while we know that the future is always to some extent uncertain, following the EU referendum it feels as though our uncertainty has risen sharply.

How then can we overcome the inertia and anxiety that results from living in uncertain times?

Well we know that we can’t exactly anticipate the risks we face now or in the future: but we must act if as if we do in our role as civic leaders in our communities.

In an era when the politics of uncertainty dominate – publics of varying kinds demand the right to hold decision makers to account and their judgments made publicly transparent.

This has led to a situation where decision-makers are becoming more preoccupied with managing their own risks to their reputations as a consequence.

And it is leading to a dangerous culture of defensiveness in politics and in government: causing a rupture in our relationships with those we serve - our constituents.

Instead, we need new forms of leadership capable of developing a language of risk that explicitly admits the possibility of failure without this being understood as an excuse or blame-avoiding strategy.

The new politics of uncertainty must generate legitimacy for the possibility of failure - as this opens up many opportunities to recast our relationship with our citizens.

So my biggest hope for Newham in this post-Brexit era is that we manage to take care of each other, that we build this community further on trust, solidarity, and generosity. And we remain honest about the risks associated in a world dominated by uncertainty".
Posted by John Gray at Friday, September 23, 2016