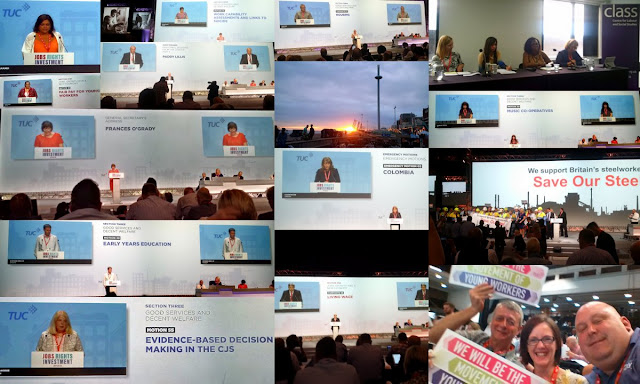 My second collage of Twitter photos of the UNISON delegation (mostly) at this year's TUC Congress getting stuck in and telling it as it is.

We started off with Gordon McKay, berating our mean employers for not knowing how to add up and stop being crooks, so they should pay the National minimum wage in full.

Sinead Libby tells Congress of the various disgraceful way the Tories cheat young workers out of fair pay
A well argued, passionate address by Trade Union Congress General Secretary, Frances O'Grady, warning bad employers that unless they change - the unions are coming for them.
All of Congress held up support posters proclaiming that "We will be the movement for young workers".  (While Becky from Eastern Region qualifies I am not really sure that Darren and I are the best poster boys for that particular statement? We will do our best)
Paddy Lillis, the Chair of the Labour Party NEC gave Congress the fraternal address. He said he had been hoping for a bit of a quiet year when he was elected. Little did he know...
Caryl Nobbs points out that there is no objective evidence to justify the breaking up and privatisation of the Probation Service but the Government still went ahead with it.
I seconded the Composite 12 motion on Housing
Nicky Ramanandi supports fair and equitable welfare benefits and looks forward to the end of the subsidy for poverty pay employers and making sure they pay a real fair wage.
Maggie Griffin argues that the Tories Work Capability Assessment is not "fit for purpose" and linked to a staggering 700 suicides by disabled benefit claimants.
Lilian Macer describes her experiences meeting victims and their families during a UNISON delegation visit to Columbia. The most dangerous place in the world to be a trade union activist. Thousands have been murdered and tortured.
Stephen Smellie spoke on The Early Years Education motion and asked Congress to support the motion for the sake of his grandchildren.
My long standing comrade, Barbara White, (Musicians Union and a Redbridge Councillor) moved the "Music Co-operatives" motion 39.
I went to an interesting CLASS fringe "A Year of Tory Rule: Taking Stock of Public Services" during lunch time. It is all pretty depressing but good news about the huge support that the public have for Public v. Private Services. We need to turn this into votes.
Posted by John Gray at Wednesday, September 14, 2016