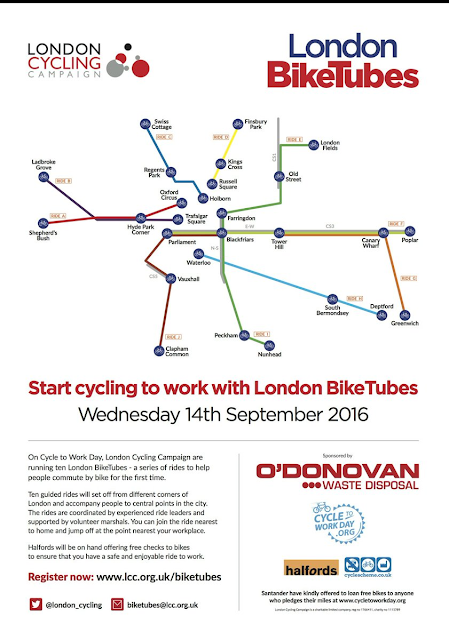 This is a fantastic initiative by the London Cycling Campaign. My union work takes me across London and I find cycling often takes less time to get there than public transport or by car.
There are also a number of relatively quiet and attractive routes you can take even in busy London.
Yesterday, I took the fast cycle "Super Highways" from Stratford to Merton but on the way back took Route 20 for part of the way which went along the River Wandle and Parks.  Then I cycled to Euston via the Thames. (I did then get a bit lost but never mind about that)
Today I went via a hired "Ken Bike" (now sponsored by the Santander) through the Queen Elizabeth Olympic Park, Victoria Park and along Regent Canal into Euston. A (largely) glorious and traffic free route into the centre of London. The sunshine helped make it a lovely commute.
"On Cycle to Work Day, London Cycling Campaign are running ten London BikeTubes - a series of rides to help people commute by bike for the fist time.
Ten guided rides will set of from different corners of
London and accompany people to central points in the city.

The rides are coordinated by experienced ride leaders and
supported by volunteer marshals. You can join the ride nearest to home and jump of at the point nearest your workplace.

Halfords will be on hand offering free checks to bikes
to ensure that you have a safe and enjoyable ride to work.

Register now: www.lcc.org.uk/biketubes
Santander have kindly offered to loan free bikes to anyone
who pledges their miles at www.cycletoworkday.org
@london_cycling biketubes@lcc.org.uk"
Posted by John Gray at Thursday, September 08, 2016