Victory for decency at work - Sports Direct will hold an independant review into its employment practices. 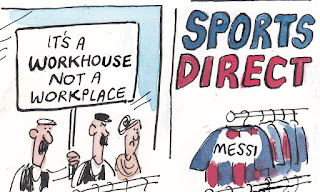 In what is also a victory for effective pension stewardship, "workhouse employer" Sports Direct agreed to hold an independent review into its awful working practices and governance.

Trade Union Share Owners (TUSO) have welcomed the announcement today (Tuesday) by Sports Direct that there will be an independent review of the company’s working practices and corporate governance.

The announcement follows a resolution calling for an independent review that was tabled at the company’s AGM earlier this month by TUSO, and supported by a majority of independent shareholders.

TUSO Chair Janet Williamson said: “This is good news for Sports Direct workers, especially young workers who make up a large part of their staff but too often get a poor deal at work.

“The board should now consult both shareholders and trade unions in finalising the plans for the independent review. Trade unions representing workers at Sports Direct stand ready to work with the company to ensure a successful future that is fair for its staff.”