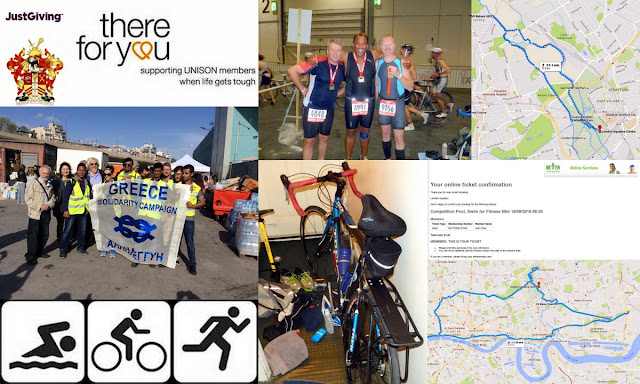 Just getting things sorted for tomorrows self organised Olympic distance triathlon. Currently I am wondering why do I volunteer for such things!

I am meeting fellow Newham Councillor, Terry Paul, at the London Aquatic centre in Queen Elizabeth Olympic Park at 9.15am for 1.5k swim,. We then cycle 40k to Big Ben at the Palace of Westminster via the Olympic Veldrome, Victoria Park and Regent canal. Next along the Super cycle highway CS3 to Barking and then back to the Aquatic Centre via the Greenway.

Finally, we go on a 10k run up and down the Lea rivers.

See routes in collage above and picture of Terry, myself (and his brother-in-law who is not taking part tomorrow) after we had completed the 2014 London Excel Triathlon.

I will be raising funds for the UNISON charity "there for you" and the "Greece Solidarity Campaign".