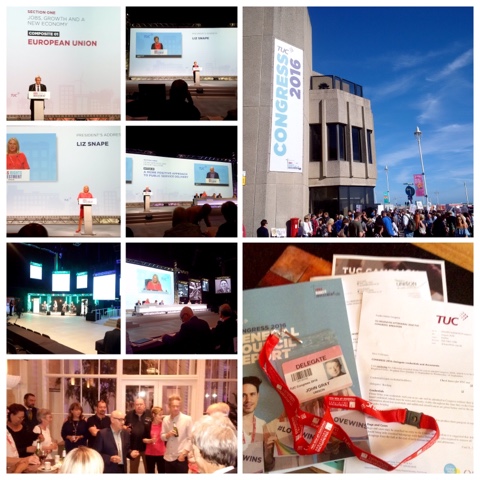 On Sunday I travelled down to Brighton as part of the 60 strong UNISON delegation to the 148th Trade Union Congress. This is the annual Conference or Parliament of the British Trade Union movement. Congress started for me with a delegation meeting at 3pm, where we discussed business and agreed policy towards motions and who would speak on behalf of UNISON. I found out that I would be speaking in the Housing debate the following morning, so I knew that I had a busy night and early start writing my speech.
Congress started at 4pm in the main hall of the Brighton Conference centre. The unison delegation this year had a good position in the middle of the hall directly in front of the speakers podium.
This years President of the TUC is Liz Snape, who is also an UNISON Assistant General Secretary. Congress was opened by Liz and the first major item was to remember union activists that had died in the previous year. This included Jo Cox MP.
The first UNISON speaker was Glenn Williams, who spoke about Devomanc and Devoscouse in the debate on "A more positive approach to public service delivery".
Liz gave her Presidential address after a cheery vote of thanks from fellow Liverpudlian, Unite General Secretary, Len McCluskey.  Liz made it clear unions "must fight for their class as the Tories do for theirs".  The vote of thanks was seconded by Clare Williams from UNISON who told us about the Liz who is a friend and a comrade.
During the debate on the European Community, UNISON General Secretary, Dave Prentis, vows to defend all members and that "We will take on the racists post Brexit".
Our first international speaker was Luca Visentini, who is the General Secretary of the European Trade Union Congress. Lucan expressed great disappointment with the Brexit result but made it clear that no matter, British workers remain Europeans and the ETUC will still support them.
Congress closed for the day around 7pm. UNISON held a reception for its delegates and to honour members who are due to be given awards by The TUC.
Posted by John Gray at Monday, September 12, 2016