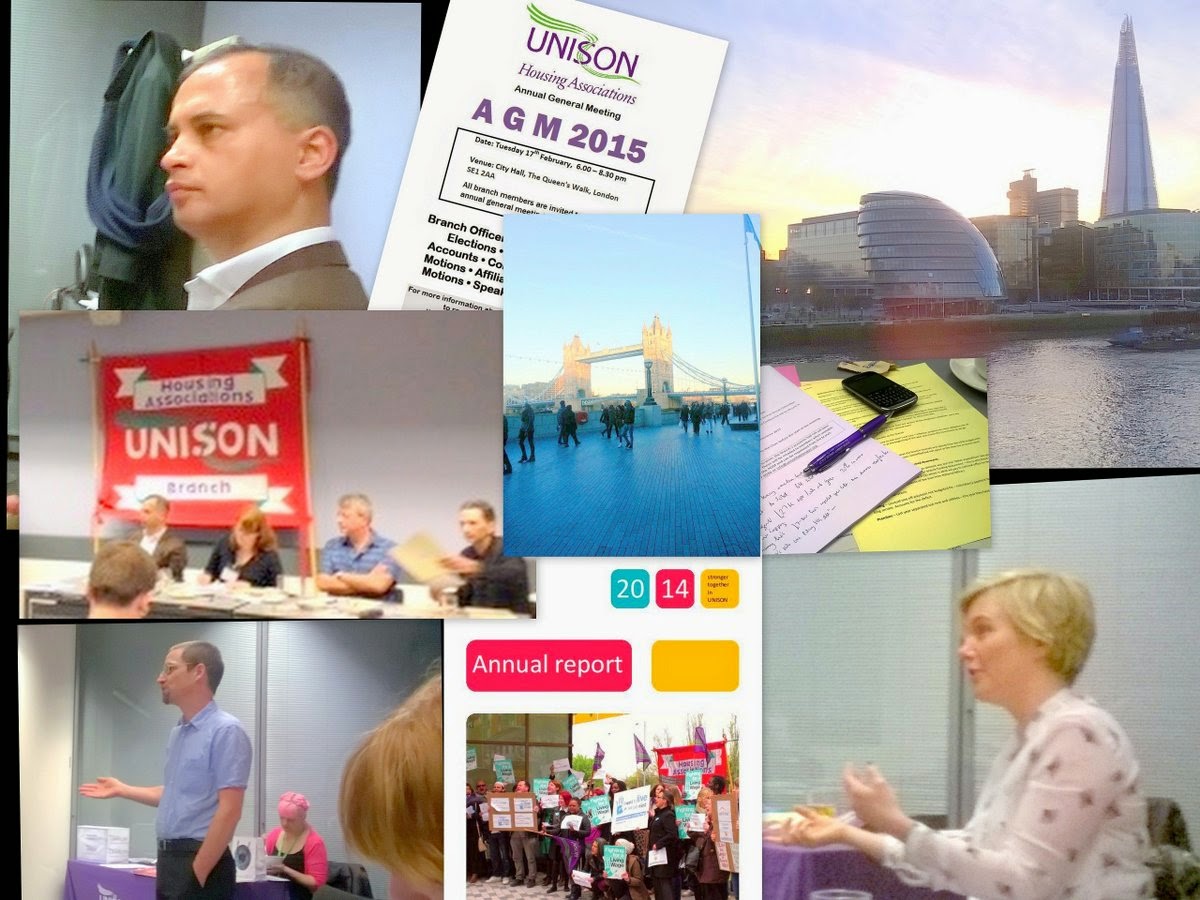 Picture collage from last night's Annual General Meeting which took place at the iconic Greater London Assembly Building, City Hall, which is next to Tower Bridge. Long standing member of our branch and London Assembly member, Murad Qureshi, was our host and gave a welcome speech to members. Murad use to work in Regeneration at the same housing office (at a different time) I worked in for many years in East London. He spoke about the importance of trade union rights and his role as a GLA member holding to account the slippery Tory Mayor, Boris Johnson.

I was re-elected unopposed as Branch Secretary for the 5th year. I obviously must have had a very wicked previous life (joke).

Our keynote speaker was Labour Shadow minister, Stella Creasy MP, who gave a passionate speech about the housing crisis we face in this country. The lack of supply, unaffordable rents and mortgages, rip off letting agencies, revenge evictions and insecure tenancies. She called for people to join the Labour fightback against the recession which we should never forget was caused by Bankers.

Martin Groombridge from London Capital Credit Union also spoke about the many, many advantages for UNISON members to join a credit union.

Our top branch regional organiser, Colin Inniss, gave a typically thoughtful speech about the imperative for all union members to vote in the General election and get rid of this nasty and reactionary Tory led coalition government. Tell your family and friends that they should vote and to remember this government has doubled the amount of time it takes before you have any protection at work from unfair dismissal; it charges you up to £1200 if you want justice at work at a tribunal if you have been unfairly treated or sacked; the massive growth of food banks and insecure zero hour contracts.

While our final guest speaker, national UNISON organiser for our sector, Simon Watson (bottom left), gave a wide ranging presentation about the challenges facing our sector on pay, job insecurity, privatisation etc and how UNISON is facing up to these challenges by campaigning and organising members to stand up for their rights at work.

The Branch is (touch wood) in good shape despite being in awful times. We are solvent, ambitious, growing (membership grew by 4.9% last year), politically active, successfully defending members individually and collectively, building new activists and becoming perhaps a model for the rest of the union on how to organise in our sector.

Many thanks to our branch staff Jo, Nazan, Sarah and Andy for all their hard work during the year and our ace UNISON Regional organisers Colin, Joy and Dario.
Posted by John Gray at Wednesday, February 18, 2015