A day with G Company 7 Rifles on Salisbury Plain 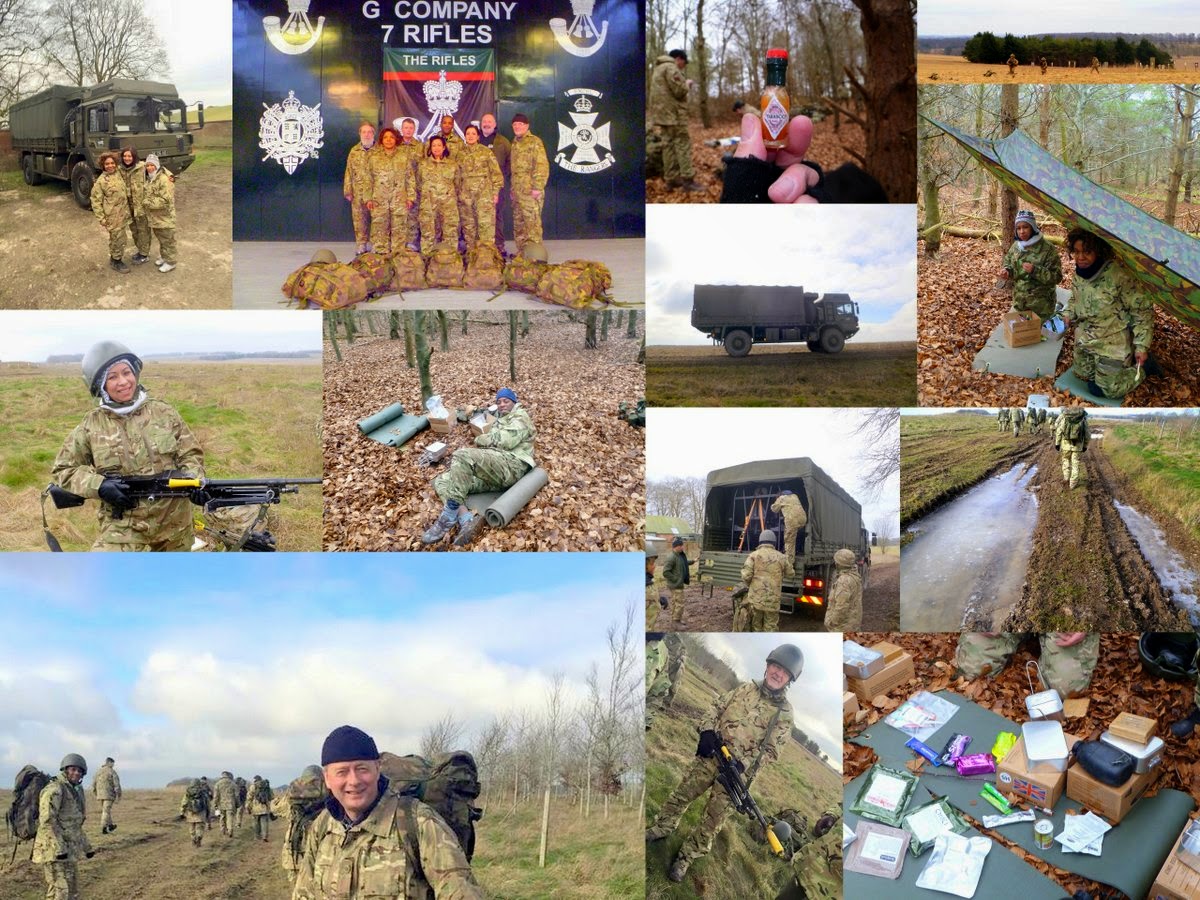 On Saturday I spent the day with 7 other Newham Councillors as the guests of G Company 7th Rifles Regiment, while they were training on Salisbury Plain, Wiltshire.

G Company is our local British Army reservist unit in Newham, based at Cedar barracks in my ward next to West Ham park. This trip had been organised by the one and only, Terry Paul, Cllr for Stratford ward.

The idea was to give local Councillors some understanding of what our reservist soldiers in the modern army have to go through. Terry and I had both been members of the "Territorial Army" (TA) when we were younger, so we had some idea of what to expect. But in our day the TA role was to support NATO against a Soviet Union invasion of Germany. Not to serve on hostile active service operations such as in Iraq or Afghanistan, which modern day reservists are normally expected to carry out.

We arrived at the Drill Hall at 7.45 and we were somewhat to our surprise were issued with combat overalls, waterproofs, Bergen's (rucksacks), 24 hour pack of rations, mess tin, cooker and steel helmets. Everyone was very welcoming and pleased to see us. We then drove by a minibus to Salisbury Plain which is a massive military training area and got off at at some disused farm buildings.

During the trip down the soldiers accompanying us were very honest and frank about their experiences while on active service. By coincidence one was born in Canning Town, a street away from where Terry was brought up while the other was his possible distant cousin. At the farm buildings we had a series of briefings about our day and were advised to put on all our warmest and windproof clothing.

G Company had arrived on the previous Friday evening and had spent the night sleeping out in the open and were carrying out reconnaissance training exercises all Saturday until about 2am the following day.  They were then planning a dawn attack on an "enemy" position on the Sunday morning.

We discovered why we had metal helmets as we climbed into our army cross country heavy goods vehicle to be transported to our first site. I used to be a military HGV driver and in my day (an expression which makes me feel pretty old) there was only a bench either side of the rear of the HGV that we were expected to sit on as passengers. Nowadays you have to wear a metal helmet and sit in racks with an airplane style safety harness. Going across rough country you appreciate wearing a helmet and harness.

After about 15 minutes we stopped at a wood near a training ground, got out and walked to the company machine gun platoon exercise. The platoon were practising coordinating and firing 7.62mm General Purpose Machine Guns (GPMG)

We then spoke to the machine gun teams about what they do and examined the GPMG and their SA 80 rifles. The machine guns, the tripods and belts of ammunition were so heavy you could not imagine carrying them as well as your other military kit.

Afterwards we went into a nearby wood which had been the sleeping area for the company the previous night and had a fantastic presentation by a rifleman on how to cook lunch from our "24 hour ration packs".  It was very cold in the wood and we all enjoyed the hot food even if it took us a little while and a bit of trial and error. Hot food is a brilliant pick-you-up that you only really appreciate if you are very cold.

We then went off to observe a section of the Rifle platoon carry out different patrolling exercises and formations. If a patrol was attacked they practiced firing back and maneuvering either to attack or move away. This is what infantry soldiering is all about. If you come under fire on a patrol you know what to do instinctively since you have practiced this time after time after time.

It was sobering to think that some of the more experienced soldiers present had actually done this in real life and had carried out these exercises while under fire from live bullets.

Finally, we drove back to the base in the HGV and then had a debrief with a cup of hot coffee then left to drive home to East London. All of us fell asleep on the way back. At Cedar barracks we dropped off our kit and changed back into our normal clothes.

I think that every single one of us Councillors really enjoyed the day and found it fascinating and different but also the friendliness and hospitality shown by everyone towards all of us was simply stunning. Thank you very much G Company 7 Rifles. You did us proud.

Afterwards some of us went to the Black Lion in Plaistow to give a toast to 7 Rifles and wish them well with the rest of the exercise.

I must admit that I was also thinking that day of my Grandfather, Frederick Matthews, who in 1915 did his basic military training in the Salisbury Plain and then went on to command a machine gun platoon in Gallipoli and later in the trenches in France. Did he practice such military skills in these very same fields and valleys 100 years ago?
Posted by John Gray at Monday, February 09, 2015