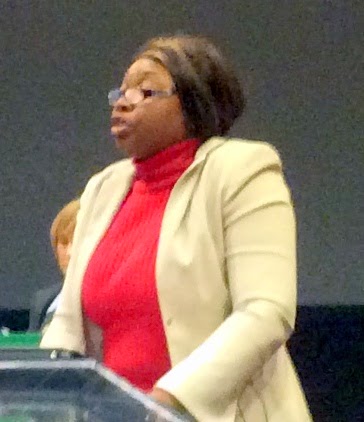 UNISON Housing Association delegate, Mitsy Harman, speaking at the regional AGM last week on our motion "Protect our Pensions" (see link here for text). This is an early draft of her speech.

"Council, from April 6 this year, this Conservative led government is about to play a huge con trick on ordinary working people.  People who have skimped and saved over the years to put money by for their futures.

Council, this money is being deliberately put at risk and the only ones to benefit will be the City crooks that finance the Conservative Party, as they rob our members over the age of 55 of their money and that of their spouses.

Remember the Tories hate anything that is collective, they don't want pension boards or independent trustees looking after their members money and making sure that it is safe. They would rather dismantle our person schemes and hand them over directly to big business to profit from.

Tory Chancellor, George Osborne, calls April 6 "pension freedom day". Council, this is not freedom, it is an occupation, an occupation by those who see you as easy pickings; an occupation that will destroy lives and end up with many of our members retiring into and dieing in poverty.

Our members in the Local Government Pension Scheme and other funded schemes such as the Pension Trust and the Social Housing Pension fund will be targeted by armies of thieves, spivs and charlatans, as they did under Thatcher, when millions of people were told to buy personal pensions and sell their company schemes.

Those of you here who have pension money invested in stakeholders or auto enrolment will also be targeted by those wanting to steal your futures as well.

We must as a union save our pensions and save our members from having them stolen and exchanged for snake oil. We have a responsibility to make sure that our pensions are safe. One of the reasons for forming unions was for decent secure retirements and we must do whatever is necessary to defend our members and their pensions.

Please support this motion, Council, I move". It was passed unanimously.
Posted by John Gray at Sunday, February 08, 2015