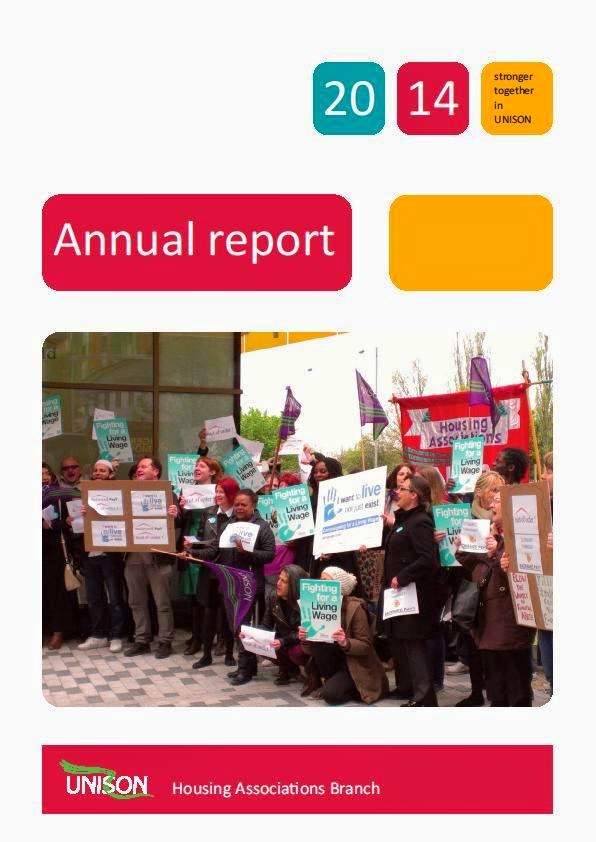 On Tuesday next week it is my branch AGM at GLA City Hall. At the meeting the Annual Report for 2014 will be tabled (see here).

I have been re-elected unopposed again as Branch secretary for 2015/2016 and below is my contribution to the 2014 annual report.

"Our branch staff, stewards and activists have continued to protect members in the most difficult of circumstances against some of the very worse cuts in jobs and attacks on pay, pensions, terms and conditions.

Care and support staff wages in particular are under threat as unscrupulous employers deliberately underbid to win contracts then try and do their upmost to destroy TUPE protections.

All staff in our sector have suffered pay cuts while many housing management organisations are cash rich after years of inflation plus rent rises yet still refuse to pay their staff properly. This cannot be allowed to continue. Members must be prepared to stand up to employers when they are being treated unfairly and the union must be there to support them.

While the representation of members in disciplines, sickness and grievances is a key part of what we do as a union, collective bargaining over pay, conditions and redundancies’ is the most important thing that unions can do for you. While not everyone will need personal representation, everyone will be impacted by threats to their jobs if, for example, there is a restructure or merger. In order to defend your rights we need to remember what our grandparents knew. The more of us in the union the better the deal the union will get.

We need trade union recognition agreements in every single employer in our sector. You cannot rely on employment law to protect you at work. You can only rely on your union and your fellow workers.

We need more employees to become UNISON members and activists. To help protect yourself ask a work colleague to become a UNISON member or become a workplace activist or local steward yourself.

In 2015 we must also continue to work with our regional and the national union to campaign against austerity and must play our part in arguing for an alternative economic policy regardless of who wins the General Election in May.

The branch is in better shape than it has been for many years. Membership is growing and the branch is building a network of activists to help it protect and support members further and grow the union. Become part of this network and contact your local steward or the branch about becoming an UNISON activist.