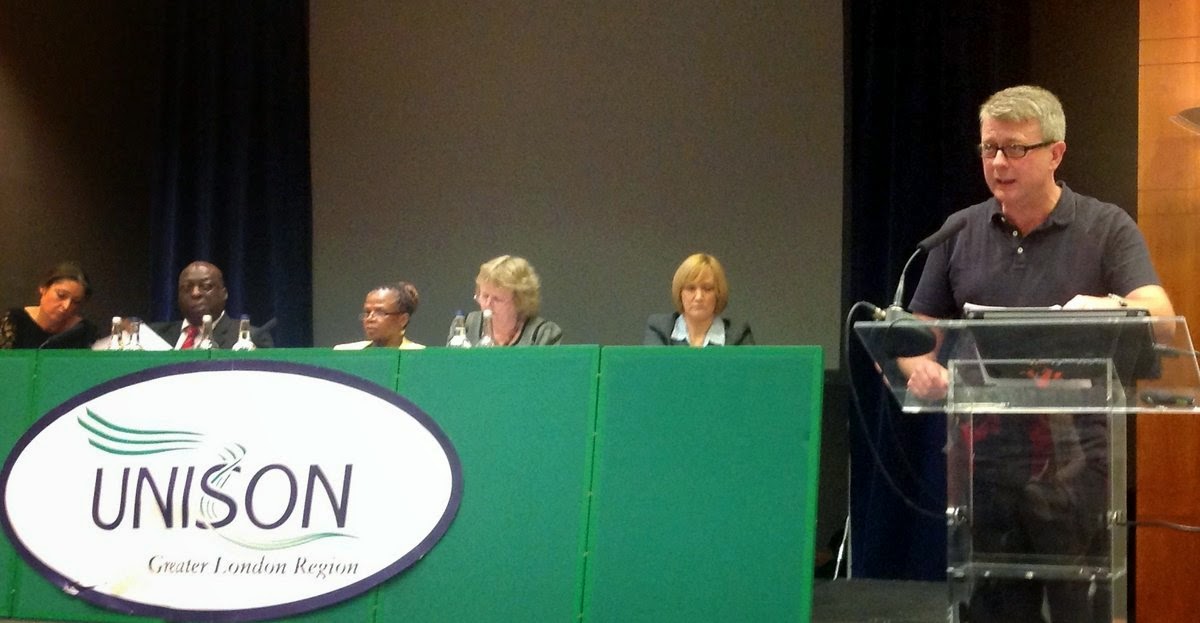 This is me speaking last week at our UNISON London Regional Council AGM.

The motion was on "Union busting by UK public service providers" (see link for wording).

There a number of completely rogue and fascistic large UK Charities and Housing  Associations who refuse to recognise human rights and who threaten and attack union activists trying to protect their members.

This motion argues that no employer should have access to any public funds or procurement if they do not have a recognition agreement with a TUC affiliated trade union.

"Council, the United Nations recognises that there are 10 fundamental human rights and of those 10 rights is included that of free assembly for trade unions and collective bargaining. In the history of our union movement, activists have given their lives and their liberty in the fight to have trade unions recognised.

Unions in this country and all over the world are under attack. In the UK are numbers have gone down significantly but in recent years numbers have stabilised and we may see soon a return to growth. It is no coincidence that the massive decline in pay in recent years has been linked to the decline of collective bargaining. Workers desperately need the unions to protect and strengthen their terms and conditions by collective bargaining.

The best way to get recognition and collective bargaining is by action by members forcing anti-trade union employers to negotiate and bargain with unions. Yet when you are in a fight with employers for justice at work you want every help you can get.

Council, is it not perverse that in this county vast amounts of public money is handed over to organisations, which are hostile to unions? Why is this money going to organisations who don't believe in human rights? If public money was going to those who employed child labour or used corruption there would be an outcry. Yet we have allowed the government and employers to pick and choose which human rights they want to respect. A human right is a human right.

No organisation which refuses to recognise a trade union should be allowed to bid for any form of public money or support. No grants, No contracts, No loans, no Partnerships, No deals - not even housing benefit.

Council, What have they got to hide? Remember, that there is an extreme right wing ideology against trade unions. It is called corporatism. A core belief of corporatism is to get rid of trade unions and replace them with powerless and compliant staff associations.

While we would expect some hostile private sector employer to be anti union, we have organisations in this country masquerading as socially responsible charities.  They not only refuse to recognise trade unions but carry out trade union busting to threaten and frighten union activists and members.

Council, please support this motion and help send a message that trade unionism is your human right and we will not tolerate attacks on our human rights from anyone. Council, I move".

(motion was passed unopposed. I am not sure yet if it was selected for submission to our National Delegate conference. However, a version will be debated at the Community Conference later this month and I hope to try and send it by some route to the Labour Party conference in September)
Posted by John Gray at Tuesday, February 10, 2015