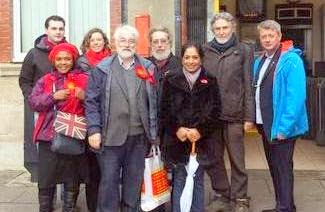 On Saturday West Ham Labour Party members went to help out Fairlop Ward in the marginal Parliament seat of Ilford North. Lyn Brown our MP sent her apologies since she has not been well lately.

We were canvassing on behalf of Labour Parliamentary candidate (and Redbridge Council deputy leader) Wes Streeting.

We split into 2 canvass teams. The weather was pretty miserable and drizzly but luckily heavy rain held off. My team had plenty of exercise climbing up and down outdoor stairs in maisonettes.  Who needs to join a gym to get fit when they could join the Labour Party and go canvassing! .

The results of the door knock for Labour was pretty good. Fairlop is a Tory ward but we were able to identify plenty of solid Labour support and many who voted for the Conservatives last time are now thinking of voting Labour. I didn't come across any UKIP support. I think that many residents really appreciate that Wes Streeting is from a similar genuine working class background to them.

I knocked on one door and a very large man answered and half way through my spiel he cut me short  by saying he "would never support the Labour Party even if there was a risk of a communist takeover! Go away!" I thanked him politely for his time and went next door where a very dignified looking lady answered the door and listened patiently to my pitch, then said "I do not support your Party but thank you so very much for taking the time to call". What a Classy lady, definitely old school!  The next two households I called at were lifelong Labour supporters.

Door knocking can be cold, wet and miserable but rarely boring - since you never really know what will happen when you knock on that next door.
Posted by John Gray at Tuesday, November 11, 2014