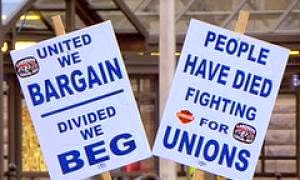 This is an update on the attempt by a "Charity" - Catalyst Housing Association to attack and de-recognise UNISON. See previous reports here,   here and here.

This followed a complaint to Catalyst by UNISON about bullying by its HR. We have since found out that Catalyst has been secretly planning to merge with another large Housing Association called Network.

So I think it is pretty clear that one of the reasons for this attack on union rights is to try and prevent us from protecting members from any possible redundancies or cuts to terms and conditions following a merger. As well as an attempt to stop us scrutinising any further increase in the huge payments that Catalyst senior management have been giving themselves.

A collective grievance was supported by 100% of members who voted (bar 2 abstentions) which has now been sent to the Catalyst Board. I hope that common sense and reason will prevail and that the Board will reign in its management.

However, a lobby is being planned and a motion was passed last week by Greater London UNISON Housing Association branch against Union Busting which I will post on later this week. This will go to our National conference and I will also send copies to various Labour Councillors and local Labour Parties and see if we can send a version to the Labour Party conference next year.
Posted by John Gray at Monday, November 10, 2014