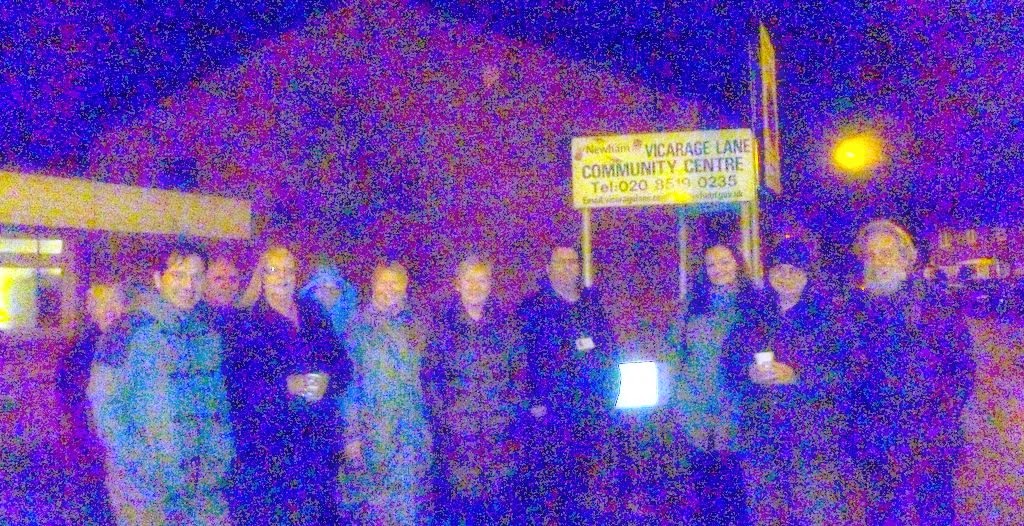 Apologises for the poor quality photograph but it is a record of last nights "walkabout" with local residents and Council officers in West Ham Ward, E15, Newham.

Ham Park village has an active Residents Association. Following a recent RA meeting it was decided that we ought to go and walk around the area "out of office" hours in winter to check on street lighting, parking, ASB, pot holes and dumped rubbish.

There were 3 council officers and all three ward Councillors present and about 10 local residents who met at 6.30pm at the local Vicarage Lane Community Centre. After a quick cup of tea  (thank you Kim) we then spent about hour and half touring the local area, taking notes about environmental issues and problems. Luckily the rain had just stopped.

We also had various chats with residents about the history of the area, going hopping in their youth, Kentish apples, urban foxes, "beds in sheds", Aileen Walk gates and the hugely important pros and cons of controlled parking zones.

It is fair to say that during the course of the "walkabout" a number of let me say, not particularly positive comments were made about the Council, but I was really pleased that at the end residents thanked the Council officers present for giving up their evenings to come out with them and tour their manor.

Council officers made copious notes and took a number of photographs and we will let residents know what can be done to address the problems that we discovered and there will be a review and report back meeting probably now in January.
Posted by John Gray at Tuesday, November 04, 2014