A Living wage for all Newham Council workers? 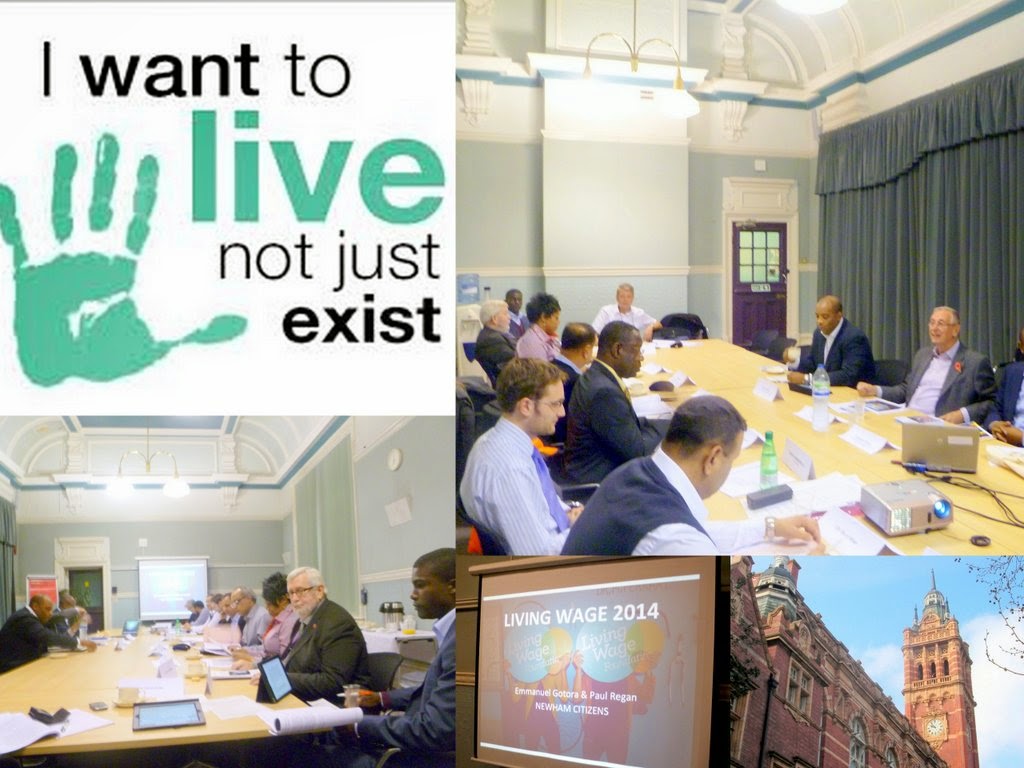 At the last meeting earlier this month of the Regeneration and Employment Scrutiny Commission, Councillors considered a "Living Wage" for all Newham Council workers.

We had a presentation by Emmanuel Gotora and Paul Regan from Newham citizens on behalf of the Living Wage commission.

Our Scrutiny meetings are open to the public and recently the Council constitution was changed to allow photographs to be taken during such meetings.

At our first meeting following the election in May we had agreed the work plan for the next year. This included an examination into whether Newham Council should be a Living wage employer, which was a manifesto commitment and Labour Group policy. In order to scope out how we will investigate this our Scrutiny officer had contacted the Living Wage Commission who had recommended we invite Newham Citizens to come in and present to us on this subject.

Paul was a retired Methodist minister and long term Newham resident who is a Board member of the Living wage commission and Emmanuel is a paid senior organiser for Newham Citizens.

Low pay is a huge issue in Newham, which according to these statistics "the proportion of residents paid less than the London Living Wage was highest in Newham (37%) followed by Brent (32%). while the borough with the lowest proportion of residents in low paid work was Richmond upon Thames (11%). Nearly 20% of Newham workers are also estimated to be paid less than even the National Minimum wage.

11 London councils (out of 33) pay a living wage and in total 30 councils nationally. There are about 600,000 predominantly black and female workers in London who somehow exist on below a living wage. The taxpayer is forced to subsidise these poverty pay employers with housing benefit and tax credits.

Being an accredited  living wage employer only costs a maximum of £400 per year for a local authority (£50 for a small employer) and there is very little ongoing compliance costs since unions and workers are relied upon to "whistle blow" if they are being cheated out of an agreed wage.

Over 80% of businesses report positive economic benefits of a Living wage.There is greater retention of workers, which means spending less money on recruitment and training.  There is also less time reported off for sickness. A living wage also builds individual economic resilience and helps "make work pay".

They suggested that perhaps the Royal Docks ward should be the first Living Wage zone in the Country. Beating the plans of Canary Wharf in Tower Hamlets who are actively thinking of doing this.

When business consultants KPMG introduced a Living wage for their office cleaning contracting staff, they redesigned the contract and improved quality while also reducing costs. Bins were taken away from individual desks and offices were given collective bins. Cleaners were asked to work during the day rather than early morning or late at night. This meant that cleaners felt they were part of the company and were also available for spot cleaning during the day. This saved money and improved quality.

Paul and Emmanuel also talked about their campaign elsewhere in Newham. They have met with London City Airport who won't pay their cleaners a living wage. They say that they would look into it if their partner Newham Council, also became a living wage employer. Newham council has a powerful voice and could be an important exemplifier to other local businesses.

This was a positive and constructive meeting but we cannot forget that due to the savage Government spending cuts in Council grants, Newham is facing unprecedented financial challenges. Further commission investigations into the Newham Living Wage will be held in the New Year.
Posted by John Gray at Friday, November 28, 2014