Private Thomas Highgate - the First to be Shot at Dawn 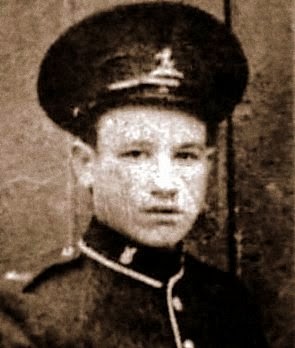 I think people know that on the 28 July this year it will be the 100th anniversary of the start of the First World War. Not many will know that within a few weeks the first British soldier had been shot by firing squad for desertion.

This morning I was looking for a Sunday walk in the country and picked this 7 mile circular route starting in Shoreham, Kent.

Before I left I checked google for Shoreham and on Wikipedia found this "Shoreham was the birthplace and home of Private Thomas Highgate, who was the first British soldier to be shot for desertion during the First World War on 8 September 1914, following the Battle of and Retreat from Mons. In 2000, Shoreham Parish Council voted not to include his name on its war memorial. However, after a posthumous pardon in 2006, it was considered that his name might be added.[1]"#

I wondered if 19 year old Thomas's (see picture above) name had indeed been added to the War memorial and decided at the end of the walk to have a look.

The walk itself was wonderful (click for photos) and I would recommend it. Lots of up and down hills with great views and different scenery. You go past the historic Roman villa and Castle at Lullingstone. The only significant downside being some noise from nearby (but very largely unseen) motorway.

At the War Memorial near the old village bridge there was no sign of his name on it. I have since found out via the Internet that the issue has been hugely controversial in the village. It appears that 2 (or 3) of his brothers were later killed in the War but also that Thomas had deserted once before while in the (peace time) Army and had been imprisoned for 42 days.  It is reported also that Thomas had no witnesses for his defence at his trial for desertion since the rest of his unit were killed in the Battle.

I think that this is at the end of the day a matter for the local community and no-one else.

I will say that on the way out of the village I noticed 3 local teenage boys sitting on a wall near the village shop, probably aged about 15, looking bored and fed up as only adolescent boys can be. They were only a couple of years younger at most than Thomas was when he joined the Army at 17. I do wonder how they would have dealt with the aftermath following the carnage at the Battle of Mons?

Thanks for blogging about this - interesting to hear about the local issue.

I teach History at Liverpool University and this is a subject I discuss with my students. I've written about it: http://gcgosling.wordpress.com/2014/01/13/shotatdawn/

Yes, this is a issue that "brings history to life".

Great article on your blog.

I disagree, this is not just a matter for the "local community" it is a matter for everyone. Look at his face, Thomas was a boy, not a man, and he witnessed terrors that you and I will hopefully never see. He had been knee deep in soaking wet clothes spending nights in trenches invested with rats and had seen his comrades blown to pieces around him.

Shoreham Parish Council left a blank space on the plaque and pledged that if was ever pardoned then his name would be added to their memorial. Thomas Highgate was pardoned by H.M. Government in 2006. Eight years later the blank space remains. 170 villages voted to have his name there but a Major Michael Green from the RBL has overruled them.

Major Green, Still alive at the grand old age of 94, Thomas Highgate didn't even live long enough to reach the age of 20.

The Parish Council should hang their heads in shame, instead it was the mother of Thomas who had to flee the village in shame.

RIP Thomas, some of us continue the fight to have your name honoured.

I think we have to respect the opinions of those we don't agree with and perhaps one way forward on this difficult matter is to let a later generation decide.

I can understand why those who actually fought in the second world may have a very different view than ours.

A small technical point - the Battle that Thomas was part of was extremely violent and bloody but at that early stage of the war there was no trenches as such and it was an open battlefield.

Although this very emotive issue will continue, the decision to include his name on our memorial will probably be that of the RBL and until they decide otherwise the blank space will probably remain.

Hello John,
I've read a lot about these 306 soldiers executed by their own side. Some lost their lives for alleged offences of cowardice which ceased to be punishable by death in 1929. Many were under age boy soldiers. According to Military Law, they should have been sent home, not gunned down by a firing squad. Many were unrepresented, medical evidence not obtained and right of appeal denied.
As their stories are coming to light, it is being revealed that many showed great courage. One, Patrick Downey, was shot for disobedience, refusing to wear a soaking wet cap. His last words were: "That's a good joke. You let me enlist and then you bring me here and shoot me"! He kept his humour unto his dying words.
It was Field Marshal Haig who signed all death warrants and was the architect of the insane frontal attacks on the German lines which cost so many lives. There is a statue of him in Whitehall, the Daily Express once ran a a story on its front page calling for it to be removed.

Greetings John and Christabel, and to Major Anonymous!

You are probably correct John, when mentioning the absence of trenches at this battle, and I accept that you are, but was not Christabel's reference to 'trenches' purely figurative?
Ever since 1918 people have always referred to 'the trenches'.

As for you Major Anonymous, can you please explain why the plaque is the decision of RBL and not the local community?

Can you also please explain this obvious personal opposition to the plaque, in the face of the Government pardon? Do you know something the Government is unaware of, regarding this matter?
Finally, have you considered that if the RBL choose to put two fingers up to the unspeakable suffering of this WW1 soldier and also that of his two brothers - not to mention the will of the local community - then the local community may feel the same way towards the RBL around the time of Poppy Day!

If your view reflects that of the RBL, it's a bit hypocritical isn't it?

Lastly, who but someone who's ashamed of what they are writing, would do so anonymously?

I think I pretty much agree with your arguments except we have recognise that there is genuine problems with us judging historic issues from our 21st standards.

Haig is in my view definitely a villain up to 1918 but then was C-C of most probably the most successful British Army counter offensive in our history which brought the war to a rapid close saving many lives.

History tells us it is difficult to pigeon hole.

I think it is fair to state that no matter how awful the Battle (and retreat) of the Mons was that it was very different from the "trenches".

I don't mind people making considered points if they anonymous.

It is usually because they can't work out how to register with Blogger rather than being shy with their name in my experience.

For what it is worth I do think that both sides in this argument ought to recognise that in reality you both have much in common.

You all want to recognise and honour our war dead. You do not at this moment agree on how to define all war dead.

So be it. I think that with the passage of time you will. Until then in this important centenary year let us concentrate on what unites us rather than divides us.

The death of Private Highgate in 1914 moves me as does the life of my Grandfather who fought for 3 years in that war and was a decorated hero but suffered from his experiences all his life until he died in the 1970s.