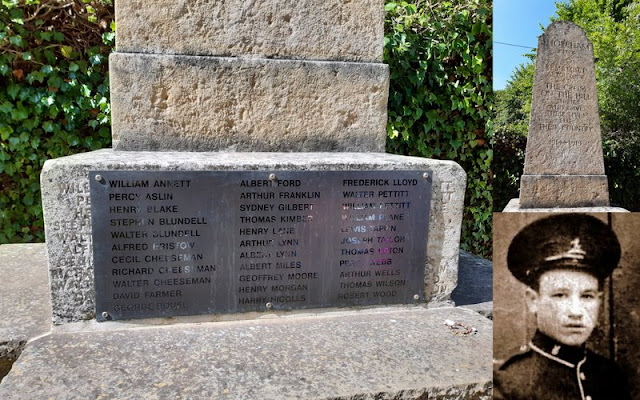 Early in 2014 I posted here on a controversy in the village on Shoreham in Kent on whether to add the name of Private Thomas Highgate to its War Memorial.  19 year old Thomas was the first soldier to be shot for desertion by the British army authorities in the first world war.

Some local residents also posted strongly felt comments on why (or why not) he should be remembered in this way.

At the time it appeared that there was a space on the memorial for his name and now Thomas had been pardoned by the British Government (2006) that eventually his name would placed there.

Recent discord about historical statues and memorials reminded me of Thomas.

This weekend I went back to Shoreham to take another walk around its beautiful countryside and to check what had happened.  I saw that his name had not been entered and instead the space had been filled with another fallen son of the village, who had been missed off the original plaque.

Personally, for what it is worth,  I think that Thomas should be remembered on this memorial in some way, but the decision is not mine.  I hope that eventually there would be a local consensus on what to do to remember Thomas and also the other 305 British & Commonwealth soldiers who suffered the same fate during the first world war.
Posted by John Gray at Tuesday, June 23, 2020

Lots of people have been wronged in history. May be a new statue dedicated to those people.

it would have to be a very big statue