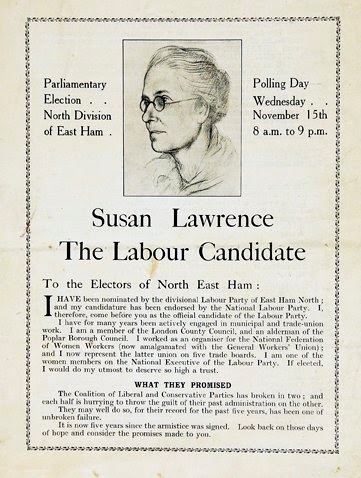 Hat tip West Ham Labour blog  "Our comrades in East Ham have invited West Ham women to their meeting. It’s an informal meeting to discuss the formation of an East Ham women’s section and to explore and debate ‘women’s role in elections’ and is there a ‘women’s vote?’.
Speakers:

It promises to be a lively, fun evening full of insight, shared experiences, networking, seeing old friends and making new ones!

(Check out Newham Story for the picture of Susan Lawrence's election address from 1923 when she became MP for East Ham and made Labour history by becoming one of the first ever women Labour members to Parliament.  I also use to manage Susan Lawrence House in Bow as a Housing officer and once spoke to a relative of Susan who wanted to know the location of the building)
Posted by John Gray at Sunday, January 26, 2014