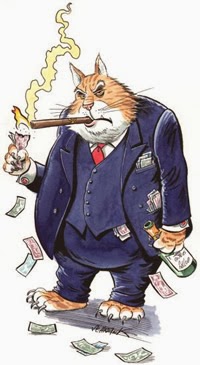 Did you realise that yesterday was "Fat Cat Wednesday"? "Top executives will have earned more money by mid-morning today than the average worker does in a year, making it "fat cat Wednesday", a new report says.

The High Pay Centre think tank said chief executives in the FTSE 100 were paid an average of almost £4.3 million in 2012, equivalent to an hourly wage of well over £1,000, compared with the country's average annual wage of £26,000.

Executive pay has increased by 74% over the past decade, while wages for ordinary workers have remained "flat", the study found. Company bosses who returned to work on Monday after the festive break will have made more money in 2014 by mid-morning today than the annual salary of average workers, said the report.

UNISON Comment: Our pension funds should be voting NO to these outrageous pay deals at the company AGMs!"