Ed Miliband & How to overcome distrust in British Politics 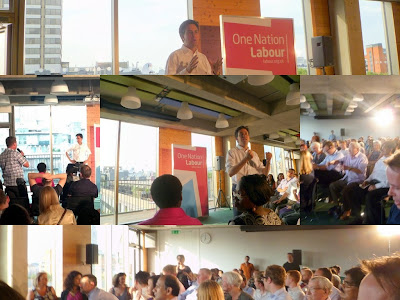 Yesterday evening I went to the Coin Street Community Centre in South London with fellow UNISON Labour Link activists to take part in a Q&A with the Labour Leader.

The room was packed with affiliated trade unionists and Labour Party activists with some media also present. It was stiflingly hot due to the current heatwave.

Ed came in and explained to the audience that he is not going to speak long since he wants to have a conversation.

He wants to start a conversion with trade union members and activists that will lead to a Special Conference in the spring next year to agree changes (only allow affiliations from union members who actively choose to support the Labour Party rather than block affiliations - see my initial thoughts here on subject).

Politics should be powered by ordinary people. He has 4 points to make: Politics is dominated by the wealthy and powerful. You can see Big Tobacco at Downing Street. Is this about a break with the links with the unions? No, the unions founded the Labour Party.  The unions are the voice of  working people.  This is not about removing this voice but how that voice is exercised.

The problem is that many people think that the Tories write them off and Labour takes them for granted? We need to persuade people to join the Party. Not just Trade unionists but small business people as well. The excellent experience of the French socialists in their recent Presidential election is what he hopes for the London Mayor Primary with registered Labour supporters.  If we want to change we need to hear the voices of the people.  Leadership of the Party is essential but we need a genuine movement rooted in every community.

There then followed quite a far reaching debate. Ed repeatedly said it was "open house". He was asked questions on whether the purpose of a primary is to stop "left" candidates in London? (answer "No"). The lack of Labour Parliamentary candidates who are women, BME or working class (answer "agreed" and he will do something about this).  "Jack" a 92 Year trade unionist in the audience took Ed to task for the failure of the Party to recruit more union members to the Party. Ed asked him how long he had been in the Party. Jack replied he first voted for Labour in 1945 while in the Army in Egypt. He joined the Party later after he left the Communist Party.

There was some support for Ed's proposals about trade unions from activists but most contributions on this subject were more cautious or frankly sceptical. Ed made it clear that he could not understand why a trade union member who did not support Labour could be affiliated to the Party. He thought that things had changed in recent years and that sense of collectivism amongst working people was not as strong as it use to be.

I got the opportunity to ask him a question. I introduced myself and pointed I am an activist in  UNISON and we have always allowed members to opt in to pay the Labour Levy but I respect the rights of other unions who have gone through internal democratic processes to affiliate all or part of their membership. I didn't think that things had changed that much since there had always been significant numbers of working class Tories in the union movement.

My main point was why are we doing this less than 2 years before a general election when the Tories will out spend us as usual and we will need every penny we can get to defeat them? Why not allow all affiliates to become full Party members, lets then have 3,200,000 members and if a Tory gets a membership card in the post he doesn't like - he can resign.

Ed responded by saying he understood the risks to funding and as Leader was taking responsibility for this decision.

After probably 25 or so questions (including a 12 and 14 year old from Tower Hamlets) Ed called the meeting to a close since it was so hot. No one made the obvious joke about the cause being all that "hot air"!

A very competent performance by Ed but I do hope first and foremost if the changes go ahead that he is right and that we will have enough money in 2015 to defeat the Tories and overcome their extremely "wealthy and powerful" donors.

Secondly, while I suspect UNISON influence in the Party will probably be strengthened by his proposals, the Party itself needs to change as well as any changes to union affiliation. Unless you give individual members more meaningful influence in the running of the Party then you are simply not going to get a new mass "movement rooted in every community".

Afterwards we went off to a local pub to continue to put the world to rights and rehydrate (medicinal reasons only).