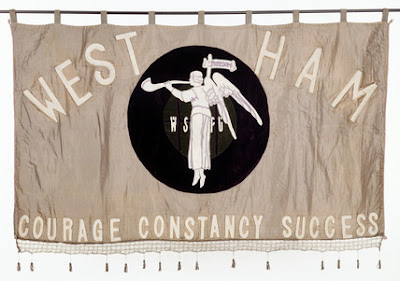 This is a speech by Newham (born and bred) Councillor, Ellie Robinson, at the Full Council meeting last Monday.

It was a marvelous speech and it was a shame that at that meeting we voted to change our Constitution so that Council meetings in the future can be filmed. Shame Ellie missed out on this.

"I am going to talk about Newham’s wonderful women.

We have a proud history of fabulous women here.  Yesterday was the birthday of Emmeline Pankhurst, born on the 14th July 1858, who founded the women’s franchise league which fought to allow married women a vote in local elections.

She later helped found the Women's Social and Political Union (WSPU) whose members were the first to be called the 'suffragettes'.  Emmeline's daughters Christabel and Sylvia followed in their mum’s footsteps and when the Union’s headquarters moved to London, Sylvia Pankhurst moved into the Canning Town Public Hall, now the home of Community Links on the Barking Road.  The first London branch of the Women’s Social and Political Union was formed right there.

Today, we all continue to come across fabulous women everyday - helping to run our schools, our businesses, our voluntary organisations, and our health services, and, of course our council services.

At the Mayor’s Town Show over the weekend, there were some fantastic women and girls performing, educating, organising, inspiring throughout the day.  On Saturday I went to the Forest Gate Women’s Institute food festival which is a fabulous family-friendly event organised by a great group who are currently campaigning against female genital mutilation.

Last Friday, I was very honoured to spend some time with our social workers.  The woman who let me shadow her in the morning works all hours of the day, with a smile and with incredible patience, changing families’ lives in Newham.  At the end of the day I was privileged to meet with some of our care leavers and their key workers.  One care leaver spoke confidently about our children in care council and how it had given her confidence and ambition and new skills while bouncing her new born, much loved, daughter on her lap.  When I asked the key worker about the best part of her job she told me, without hesitation how proud she had been to be her birthing partner.

There are fabulous women doing worthwhile things all around us, yet this government clearly does not respect the contribution of women.  Women’s unemployment has risen to a 25 year high whilst men’s has decreased.  The Government’s attack on welfare and plans for growth are frankly leaving women behind.

In addition, women are still underrepresented at the highest levels.

·  UK women have slipped from 33rd to 57th place since 2001 in the international power rankings
·  22% of MPs are women
·  within the legal system, only 14% of the senior judiciary are women.
·  11% of UK bank CEOs are women
·  5% of Editors of national daily newspapers are women

This is made worse by there being a real lack of black women, Asian women, working class women, disabled women and lesbian, bisexual and transgender women in positions of power and influence.

Ensuring that women are equally represented ensures that issues which affect half the population are understood and debated.  Last month, the very awesome Texas State Senator, Wendy Davis electrified the pro-choice movement with her 11-hour filibuster.  Facing down condescension and sexism, she stood and spoke for 11 hours to ensure the rigid anti-abortion bill would not go through.

We all know that important decisions affecting us all, men and women, are better made when different experiences and perspectives are heard.  Not having women at the table is huge waste of talent and potential which perpetuates itself, reproducing a model image of what leadership looks like, constraining and  stifling the aspirations of future generations.

100 years ago this year Emily Davison was killed when she threw herself under the King's horse as a protest at the government's continued failure to grant women the right to vote.  100 years on, we can all vote but there is a long way to go.

Emmeline Pankhurst said of the Suffragettes, ‘We are here, not because we are law-breakers; we are here in our efforts to become law-makers.’  Emmeline broke the law so that I and others could help make it.

Let us commit to ensure that, in Newham, in all that we plan and all that we deliver, ALL the women and girls in our care, in our schools, in our workforce, in our community have the support and the opportunity to be the best that we can be.”

Hat tip picture to Col Roi and Museum of London.