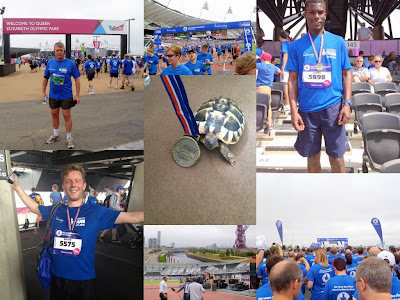 I still can't quite believe that the London Olympics have been and gone (and its now almost a year since!).

This morning I took part in a 5 mile Anniversary run around the Olympic Park finishing off in the Stadium itself.

There were I believe about 12000 runners. The weather was warm but thankfully overcast so not too hot.

It was a strange feeling waiting for the start amidst all these thousands of like minded strangers dressed in the same blue National Lottery tee-shirts.  We were divided into white, red, green and pink sections and while we waited we were blasted with very loud "motivation music" with lots of bass. Pretty much everyone was cheerful and eager to go but a little apprehensive.

I wonder why we do this? I thought we are supposed to be living in an "individualist" society. Does this sort of thing appeal to some sort of collective race memory? Who knows (or cares).

The run itself went okay although at the beginning a little crowded in places so you had to walk for a bit then run then walk again.  You could not avoid bumping into people but nearly everyone was very "English" about things with lots of "sorry" and "excuse me".

It was superb to run again through the Olympic park. The waterways and green spaces are just absolutely stunning. I can still remember the awful industrial estate and ugly railway sidings that were there when I used to cycle to work from Forest Gate to Bow.

I had a bit of a panic when I saw a 3 mile marker when I was expecting the 4 mile one but thankfully I was looking at the wrong marker.

The best part was the final 300m along the Olympic Stadium running track to the finish line with the crowd cheering and clapping. That was a long, long 300m mind!

At the end we picked up our goodie bags and medals. As we went out of the park families and young children were streaming into it for their run.

I walked back to Forest Gate feeling pretty happy and content with myself albeit just a little sore.