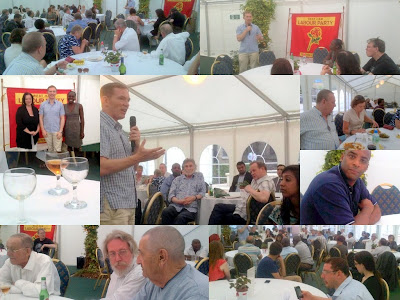 This took place in the courtyard of the Old Town Hall, Stratford, Newham.

Immigration is a sensitive political subject which the Labour Party has I think on the whole, a proud record.  Yet we were clearly punished over our policy in the 2010 election by some parts of our core vote. The Party has vowed to learn from this while not forgetting our values.

Newham is probably the most diverse borough in the UK and West Ham Labour Party reflects this. So it was fitting that Chris should spend an evening listening and debating with Party members on this key subject.

Chris started by saying that during the last General Election  he was asked questions on immigration that he did not know how to answer. While he won't enter into any "dutch auction" with the likes of UKIP, he understands that there is genuine concern about immigration and that this concern has nothing to do with racism.

The UK have had massive benefits from migration and he is not going to spend all day apologising for the last Labour Government, since we did many great things such as the longest ever period of  economic growth but we made mistakes - such as not stopping bogus collages and not restricting the right to work in the UK for new EU members - and we need to admit this to voters.

Chris attacked UK companies such as Tesco who have been quite happy to sack British workers in order to employ cheaper East Europeans on insecure and temporary contracts.   They exploit all workers for profit regardless of the damage they cause to society. Chris finished by making it clear that the vast majority of British people are not racist but they just want things to be fair.

Chris then spend over an hour on a open Q&A with all members of the audience. Everyone who wanted to ask a question or make a comment did so.

My question to Chris was that as a West Ham Councillor during a recent surgery I had a family from an immigrant background come to see me about a serious housing issue. During which a serious complaint was made about all these "foreigners" who just arrive in this country and get "given" homes immediately. While I challenged their "facts" I think that the real problem is the unfair and insecure employment practices in this country that allow such inaccurate views to be given credence.

During the last Labour Government, the Corporate tax dodgers at Amazon were given government grants to build a huge new warehouse. Yet they employed no workers on decent terms and conditions, only exploited agency workers from East Europe.  In the past when we had fairer employment practices, immigration had not been quite the issue that it has now become. This exploitation of all workers is now a cancer in our society and can only be addressed by fair wages and employment for all.

Chris did a terrific job holding his own amidst a mass of questions and comments often strongly put. He answered them all I think with honesty and at times humour.  This was a great debate for us in West Ham and I hope Chris will take back something from us as well to contribute towards the National Party discourse.

Hat tip for some of the pictures in collage to various #WesthamCLP Facebook friends. Click on collage to bring up details.
Posted by John Gray at Friday, July 19, 2013