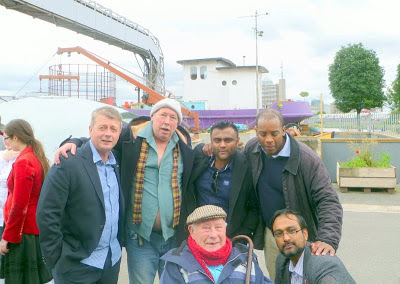 West Ham MP Lyn Brown was the special guest.  Cody Docks is an amazing regeneration project but even this was out shined on the day by the 3 generations of the Higgins family from East Ham.

I first met 90 year old Ronald Valentine Higgins (born 14 Feb 1923) several years ago at another Labour Party BBQ on Wanstead Flats. Ron has had a pretty incredible life. He started his working life in the famous Thames Iron Works, which was not far away from Cody Docks and the home of West Ham FC. He later played for West Ham and Leyton Orient FC. Since he was a semi professional footballer, he was not eligible to compete in the 1948 London Olympics, even though his running times matched that of the leading British competitors. He also managed East Ham FC.

Before this he served in the RAF during the Second World War as a gunner on Lancaster Bombers. He took part in 32 missions. The life span of an average Lancaster Bomber crew was only 20 missions. They had to complete 30. After the War and football, Ron worked in the Docks and became a GMB convener.

I think we were all really proud and humbled to meet Ron.
Posted by John Gray at Monday, July 01, 2013