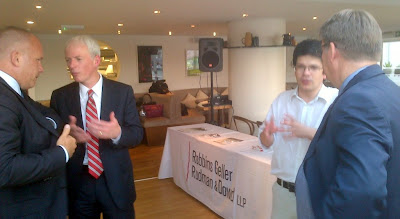 On Wednesday evening I went to the PIRC awards at the Design Museum on the south bank of London.

The winning journalists were Tom Bergin from Reuters (2nd left) who won the Corporate Governance Award for stories on tax dodging by Google.

While Rob Davies (3rd from left) from the Daily Mail won the SRI award for his work on polluting mining giant Glencore (now who would think there was good in the Daily Mail?).

I suppose that I should ask PIRC MD, Alan MacDougall (on right of photo) why there isn't an award for CG or RI Blogging?  Or is this a contradiction in terms? :)  Must ask Tom P (who was poorly last week and missed the event).
Posted by John Gray at Saturday, July 20, 2013