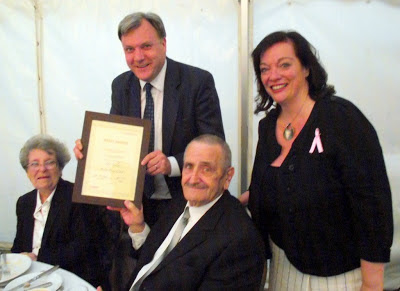 The award was presented to Ted and his wife by Ed Balls MP and our local MP Lyn Brown. It was signed by Party leader Ed Miliband and General Secretary Iain McNicol.

Ted has been a member of the Party for over 40 years. A former HGV driver and Transport & General Workers Union activist.

He has lived in Newham all his life apart from 2 years he spent as a Rifleman while on national service during the Malayan Emergency. As well as a tireless organiser for the Labour Party Ted has also spent much of his life as a respected champion of tenant's rights.

Show some sort of respect anon. I'll re-comment your idiotic trolling in my next post.