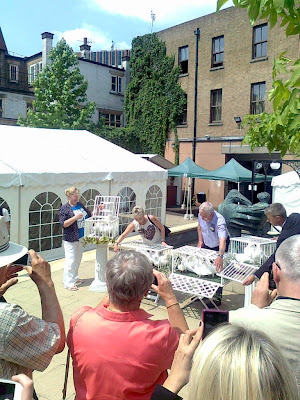 This lunchtime I was at the historic Old Town Hall in Stratford, E15 to help mark "Action Mesothelioma Day".

In the court yard people had gathered to mark the release of white doves as "tributes of love and embrace" to the relatives of all those who have died from asbestos related diseases.

I was asked by London Hazards as a local Newham Councillor to say a few words to the ceremony.  I said that I was a Labour Councillor but also an UNISON safety rep. I worked as a Housing officer in a large 1960s/1970s estate in nearby Tower Hamlets where until recently 90% of homes contained some form of asbestos.

This makes you think of the safety of the workers who first built this estate, those who have since maintained it and the residents who have lived in it.

This commemoration service was not only about obtaining justice and compensation for the many victims of asbestos and their families but also about how we must all argue for a different economic and political society that would not allow the health of future generations to be only second best to profit.

Next I helped out to release the doves - this was very beautiful and moving.

Tony O'Brien chaired the seminar that followed with first speaker Peter Williams pointing out that Newham and Barking had the worse death rates from Mesothelioma in Greater London. This was due to the traditional heavy industries located in East London but it was not only workers in these factories, building sites and docks who were exposed but their neighbours and even children in local schools.

There was a brave message of HOPE by Anne who is a mesothelioma sufferer, that with early diagnostic & good treatment you can have reasonable prognosis of a cure.  Anne wants everyone who knows they have been exposed to asbestos (which is probably all of us) to go for a CT scan as soon as they get any symptoms.

John McLean, GMB national safety officer reminded us that it was nonsense that no one knew asbestos was dangerous in the past. The first confirmed death from asbestos was nearly 100 years ago in Rochdale. The founder of the GMB was a local Labour MP (and before that West Ham Councillor) Will Thorne, who brought up the danger of asbestos in Parliament in the 1930s.

John also reported on the campaign for the removal all asbestos from public buildings & adequate "no fault" compensation for all victims. He told us about the promising research in the USA on treatment for mesothelioma.   This is early but great news for victims it also will help change attitudes to mesothelioma I think if the public understand it is not an automatic death sentence (if caught early and you receive good treatment).

Asbestos regulations are up for review this year but John thinks that the regulations are currently okay but need to take into account inadvertent exposure to the public.

UPDATE: LHC have published my account here with more photos of whole event by Joe Syz which I have copied the first one showing the release of the Doves.
Posted by John Gray at Friday, July 05, 2013