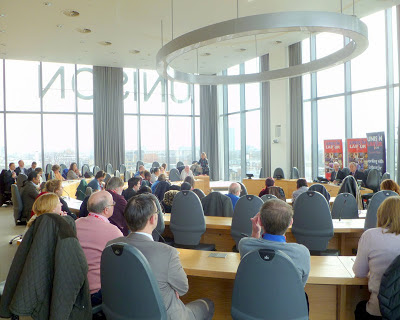 Richard began by pointing out that the long running UNISON campaign against the reduction in Meat hygiene inspectors had been proved right over the recent horse meat scandal.

He then spoke about Europe and contrasted the "left" in who want to inflate their economies in order to create growth and jobs with the "Right", who want cuts and austerity. While in the UK the only reason why the Tories are talking about leaving the EU is not really because of sovereignty but is all about rolling back Social Europe and reducing employment and health & safety protection for workers. He also reported on the recent victory in a recent EU judicial decision (Viking) in favour of labour rights above that of Capital.

I asked Richard in Q&A that the parts of Europe that seemed to being doing better in this recession were countries who have greater income equality and have greater public spending and progressive taxation. He replied that he tended to agree and said that countries such as Finland which have high taxes are amongst the most efficient and most productive economies in the world.

When he and other Labour MEPs were criticised by a London miserablist for apparently not standing up to the last Labour Government, Richard reminded him that they all refused to toe the line over the agency rights regulations and they were even sent letters threatening deselection.  While he had to say "No Prime Minister" over the issue in a very difficult telephone conversion with Gordon Brown.

He finished by reminding us all that 1 in 3 British jobs depend upon trade with EU and that the UK is a member of a number of international bodies such as the UN, ILO, IMF, World Bank etc. but no one says we should have a referendum on this. Next speaker was Chuka Umunna MP which I will post upon soon.
Posted by John Gray at Wednesday, March 06, 2013

Richard Howitt MEP is a UNISON member, John! He worked in Waltham Forest, whilst Leader of Harlow Council.

Sound as a pound! (or euro)