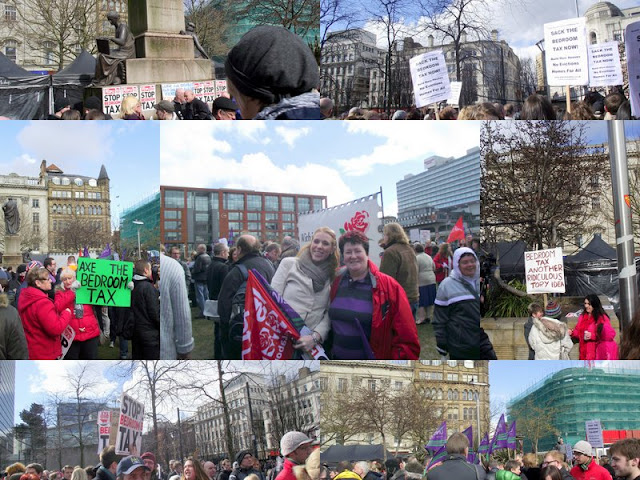 Picture from yesterday's (Saturday 16 March) lunchtime Bedroom Tax protest and mass rally in Manchester Piccadilly. Charity worker Isobel McVicar from Manchester Local Government Branch, who is also my fellow UNISON Community NEC member had organised an adjournment to our Conference for delegates to attend and support the rally.

The Bedroom Tax is a major issue to the Community members up and down the country. Not only are they going to be the workers who have to deal face to face with the resulting misery from vulnerable tenants due to the Bedroom Tax, but is is clear that many specialist Housing Association and voluntary organisations risk going under due to the whole gambit of Tory/Lib Dem welfare cuts.

Centre picture is of top UNISON and Labour movement activists Angela Rayner and Maureen Le Marinel. Angela is the branch sectary of UNISON Stockport Local Government branch and Maureen is of course one of our two UNISON National Vice Presidents.

Angela is standing for selection as the Labour Party candidate for Manchester Withington. What a superb MP she would make.
Posted by John Gray at Sunday, March 17, 2013