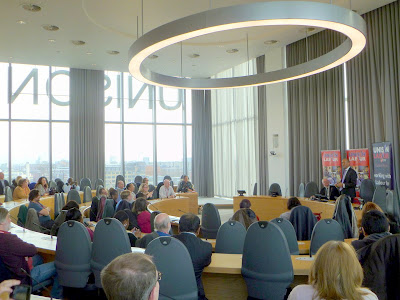 At first each region had held their separate annual meetings then we met up to hear the first guest speaker Richard Howitt MEP. Next was Chuka Umunna MP, Shadow Secretary of State for Business, Innovation and Skills.

As a former employment law solicitor he pointed out how the Tories are rolling back basic protection for all of us at work. They have already raised the limit for claiming unfair dismissal from one year to two years; introduced fees to take out an employment tribunal claim; got rid of independent lay judges; capped compensation awards and attacked TUPE as well as 3rd party harassment claims.

In the Q&A he dismissed a question from the miserablist who was rabbiting on about some silly nonsense that Chuka was supposed to have said (and had clearly not).

I asked Chuka about a recent interview with Ed Miliband during a visit to Denmark when he was reported to have been asked does he support the high public spending and taxes they have in Denmark being replicated in the UK? (obviously a trap question). Ed was quoted as saying that no he doesn't, but he is interested in copying their high skill base and training. My question was how can you have a high skill base and training without high public spending paid for by higher progressive taxation?

Chuka replied by saying he wants people to have more skills and training and a more equal society but he thinks that people in his constituency simply don't have the money to pay more taxes at the this moment. They are struggling to survive.
Posted by John Gray at Monday, March 11, 2013