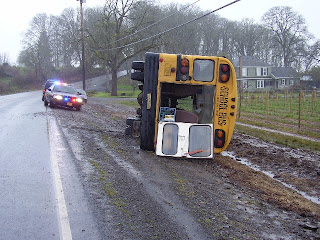 This morning I went to a breakfast seminar in London run by the North American transport trade union the Teamsters. This was before the start of the annual Pension Governance conference run by PIRC

The collection and return home of school children by the iconic yellow buses is a huge business in the USA.  There are 500,000 such buses transporting 24 million students per day.

What the Teamsters are concerned about is the USA arm of the British listed transport Company National Express (Durham School Services).

Which is accused of not only treating its school bus drivers very poorly as employees but also consistently breaks health and safety rules for its staff and student passengers. Who often have to endure overcrowded, badly maintained and potentially unsafe buses.

The Teamsters had brought two of their actual yellow school bus drivers to the UK to speak to us about the awful, bullying, nasty and unsafe work practices they have to endure. They told us first hand of their unacceptable experiences while working for National Express in the United States.

Not only were they treated with contempt and disrespect by their management, it is also clear that the safety of drivers and the children is at risk due to overcrowding, defective and poorly maintained equipment, worn tyres and drivers forced to work despite being ill.

The National Express model is to win school bus contracts by the lowest price tender and then make profits by cutting wages and maintenance to the bone and beyond.

This is a disaster waiting to happen. Apart from the absolute morale argument that we do not want   companies we invest in on behalf of our pension scheme members to act in such a way, nor do we want them to face the risk of legal or even criminal action.  There is also ongoing financial reputational risk to the company for being such a poor and irresponsible employer.

The USA has a reputation as a litigious Country. If there was to be a mass tragedy on a yellow school bus which had been previously reported to be unsafe or if the driver was sick but had been forced to work to save his job you will expect at the least a massive law suit.

The experience of the disaster in the Gulf with BP tells us that safety should be a key issue for UK pension trustees. As asset owners it is in our own long term interests to contact our fund managers and make sure that they investigate these complaints.  Then they need to take action against National Express to make it act in a responsible and safe way.
Posted by John Gray at Tuesday, March 26, 2013

How do you know if any of these facts are true?. If they are poorly paid, how can they afford to ship American school buses to the UK?. What about the environmental cost of shipping a great big lump of a bus to the UK?

Generally, militant unions have no respect the companies their work for, especially if they start accusing their employers of putting people's life at risk.

I would feel offended, if I ran a company and this is what the staff said.

This is why so many US and European companies shipped off production to China and Taiwan. Even the likes of Apple, did n't want the aggravation of dealing with American and European unions.

The Teamsters have a reputation as a militant union. I know this, because they showed they behavior in a Hollywood movie (movie about a PR political campaigner).

When the tragic BP disaster happened. I felt a sense of outrage, at the behavior of American citizen, many of who were personally blaming British people for the tragedy, as if each one of us was in some way connected to BP. Never mind that BP in the US was staffed by American workers.

Perhaps, if the American stopped their obsession with gas guzzling, the likes of BP, would not need to look for oil in ever more riskier places.

American have double standards. I wonder if these American unions, are doing anything about the oil pollutions of Niger. What about the tragedy at Bhopal - how many years has it been?.

Because I had no doubt they were telling the truth and that I am aware that National Express has been prosecuted many times by American authorities for breaches of Labour Law and safety.

Teamsters are one of the biggest trade unions in the states. They can afford to bring over a bus or two (not sure if they did - we have yellow schools buses over here as well).

So if you unions (militant or otherwise) find out their employers are putting lives at risk they should say nothing?

We own National Express not the managers who are highly paid to run it.

It was in a film you saw – so it must be true? How on earth can you base anything you say on a fictional Hollywood film?

The BP disaster was a British disaster. The CEO and most of the Board were British and it is now coming out in law suits that there was a rotten safety culture at BP from top to bottom. Wish the BP unions had been more militant and it may have never happened.

US unions and pension funds have been at the front of environmental concerns. According to your logic they just haven't been "militant" enough.