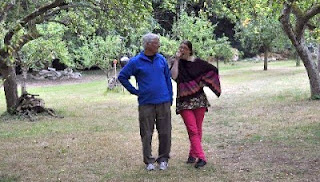 Check out this sorry tale of silly and OTT corporate bullying by EDF. Reminds me of the McLibel fiasco.

If the activists did wrong then they should have been dealt with under British criminal law or injunction and not retro bankrupted for peaceful protest.

"Our daughter Claire is one of the 21 activists who spent a week up a chimney at West Burton power station in Nottinghamshire in October 2012. Claire and her fellow activists are now being sued for £5million by EDF Energy.

Claire and her friends act on principle and are entirely altruistic in what they do. Their chosen career paths have led them, not in the direction of making as much money for themselves as they can, but rather to promote ethical and radical solutions to some of the most important issues which face the planet and ultimately the human race.

She has lobbied the government, emailed companies, signed petitions and marched with placards, but nothing changed. So Claire and her friends decided they needed to take more decisive action to get the government and energy companies to change their ways.

The group spent months preparing and training for this action; using their spare time, money and skills to enable them to scale a 300 foot chimney and survive for several days in the constant thrust of the wind. Yes, it looks dangerous, but they believe in the necessity to take such action because the alternative outcome to the continued output of emissions on this scale will cause global warming of such magnitude, that the planet will be seriously compromised and the future of the human race, uncertain. We are so proud of Claire and her friends and what they are trying to do.

EDF are suing Claire and her fellow activists for £5 million. We feel this is totally unfair. The company says that they have to take the consequences for their actions. EDF's business is to make money, not safeguard the planet for generations to come; theirs is a short term, expedient enterprise. It’s heartbreaking to think that Claire and her friends are being punished for putting themselves at risk for the good of humanity.

England celebrates its right to peaceful protest. The abolition of slavery and women's suffrage are but two issues which have only come about through this means. We should be applauding and rewarding the group for their actions rather than allowing a multi-national organisation to put them in debt, possibly for the rest of their lives for a sum, which to EDF is a mere drop in the ocean, but well over a lifetime's income for them.

We support Claire and her friends and admire their courage. Please sign this petition to tell EDF to drop this unprecedented legal assault. Thank you from Barbara and Russ Fauset

We are both semi-retired teachers. Barbara is a Licensed Reader in the Church of England and Russ teaches children with disabilities".