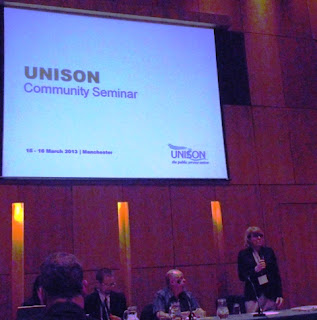 This is the seminar and conference for UNISON Community members who work in the Voluntary and Housing Association Sector which opened Friday afternoon in Manchester and finished (early) 5pm Saturday.

Karen describes herself as an unusual trade unionist since she is softly spoken. Her message however was pretty forthright and direct. The next few years are going to be tough and we are going to have to fight to protect members but if we cannot improve our union density then we will have no voice and no strength.

Next speaker was James Meadway, from the New Economics Foundation on "The Financial Crisis". James started off by hoping he would not depress us too much. I thought that he didn't and actually he raised hopes by pretty much abolishing the Tory led Government case for austerity and gave delegates the ammunition for arguing that there is a different way of running our economy. The last thing you should in a recession when there is no demand is cut government spending. What should be done instead is reverse austerity; redistribution of income; import less and democratise finance (break up banks).

After this we had a presentation by West Midlands Community branch about the highs and lows of setting up a regional wide branch.  That is a single branch for all UNISON members in the region who work in our sector (Voluntary organisations and housing associations).  Hats off to regional activists and staff who have obviously worked their socks off to get the branch up and running and to the National union for being prepared to seed fund it. It is still early days but it is a leading model of branch organisation and every other branch with community members can learn from it.

Finally there were separate regional meetings of delegates to welcome everybody and explain about conference business (speaking on motions, picking up voting cards, split votes etc) and a chance for branch representatives to decide what motions to support and to plan who will speak on what).  The London meeting also had a far ranging debate about putting our Community world to rights.

Despite the rain, a Friday night in Manchester City centre is always a good night out and I ended up with my Wexford born Branch Chair in a St Patrick's Day (or rather week) beer tent outside the Town Hall listening to live Irish music and drinking Guinness. Not sure it was the best preparation for my pension’s speech the following day...