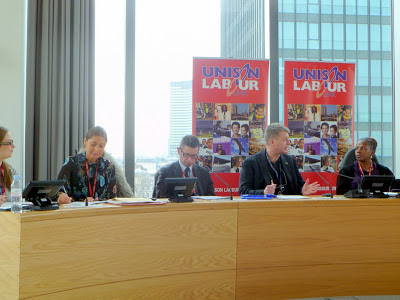 Picture from last week's UNISON London Labour Link annual forum in the UNISON HQ.  I chaired the Forum meeting with Gloria Hanson (see to my left).

It was a good business meeting where we discussed with Link delegates from London branches the financial report, this years work plan and motions to the National Forum.

Gloria took Chair when I moved this motion on "Decent Pensions for All".

Some employers and pension providers are planning to massively increase employee pension contributions. This will make them unaffordable.

The reasons given are that they must protect the fund against rising “pension liabilities”. This is nonsense.  It is well known that due to needlessly overcautious assumptions by many schemes and inflexible accounting practices, the “costs” of defined benefit pensions have risen in a totally artificial manner.  This has meant that pension schemes appear to have high deficits when in fact this has nothing to do with their underlying strengths or weaknesses.

Properly run and regulated defined benefit pension schemes are as affordable today as they have ever been. Most defined contributions schemes will not result in members getting adequate benefits when they retire. Our members will die in poverty and the taxpayers will have to subsidise bad employers for their poverty pensions.

If in the future decent defined benefit schemes are only to found in the traditional public sector then this will under mind their long term future.


This Forum calls upon Labour Link :-

To support and campaign to save all defined benefit pension schemes that we have members in from closure.

To lobby the Government to change accounting practices .

To examine the case for employers to be encouraged to seek alternative defined benefit provision in our sector and what role the Labour movement can play in this provision. In many other countries trade unions provide pensions.

To ask Labour Link to campaign within the Labour Party for a decent defined benefit pension for all".

It was accepted unanimously and selected to be one of our two regional motions submitted to the National Forum.

Afterwards there was a special joint meeting of London and Eastern England UNISON link members with guest speakers Richard Howitt, Labour Member of European Parliament and Chuka Umunna MP Shadow Secretary of State for Business, Innovation and Skills. Which was followed by Q&A's which I will post upon later.
Posted by John Gray at Monday, March 04, 2013