UNISON activist? Be a Labour Councillor! 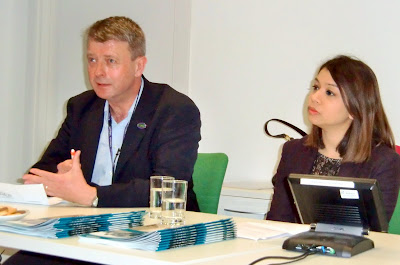 Picture is from the UNISON Labour Link and LGA Labour Group training event for UNISON activists on "becoming a Councillor".

This was the first ever event run by UNISON encouraging our members to become Councillors and took place last Tuesday evening at the UNISON HQ in Euston.

The main speaker was Cllr Tulip Siddiq, (to my left) who is a Cabinet member in Camden Council.

Tulip talked about the pressures and responsibilities of holding down a responsible full time job, a demanding Local Government Cabinet role, being a political campaigner (and trying to have a life). I gave my view as a UNISON activist and junior backbencher Councillor and agreed with Tulip that it is really demanding being a Councillor but it can be so worthwhile. You can make a difference.

After the presentations by Tulip and myself, the Group broke up into two groups led by Paul Wheeler and Martin Angus from the LGA Labour Group and went through how to get selected as a Labour Councillor and how to get elected.

I think this was one of the most important UNISON Labour Link initiatives that I have ever attended. It is imperative that we encourage our members to become local Councillors. We are a Labour Movement Family. We need to get our act together and participate in the movements political wing or how can we complain that the Party does not understand us?

This training also builds on the excellent branch London Labour Link  training event we held last year. UNISON not only needs to encourage its members to be Councillors (and working class MPs) but also to be on NHS Trusts, become School Governors, Charity and Housing Association Board members.
Posted by John Gray at Sunday, March 03, 2013