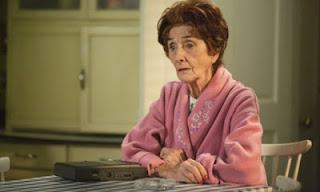 Another steal from Red Brick

"Poor old Dot Branning is facing the loss of her council house in EastEnders.

Having left the property for several months in the hands of more than one lodger, none of whom paid the rent, she has returned to find herself in arrears (more than £4,000, which seems a lot for six months away). In one slightly bizarre scene she was interviewed under caution by Council Fraud Officers about her lodgers. She has not made an arrangement to pay off the arrears so the Council is taking her to Court for possession.

The storyline isn’t about housing management procedures, but about the devastating emotional consequences of Dot potentially losing her long-term family home. There are some minor deficiencies in the story (she appears not to have a housing officer, so her first contact is with the Fraud Officers, and I can’t recall a notice of seeking possession being served or her), but my main observation is that Walford Council can only end the tenancy by going to a Court to obtain possession. That is the real meaning of security of tenure.

(As an aside for EastEnders aficionados, Dot’s supposed long occupation of the house seems a bit odd because she hasn’t always lived there and I’m sure the property was once owned by another character, but let’s not get picky about continuity).

It appears that the good burghers of Hammersmith and Fulham have not been moved by Dot’s story because they have scrapped security of tenure for future social housing tenants. New tenants will get a two or five year tenancy depending on their age and behaviour. Under their policy Dot Branning presumably would have been moved on years ago as her fixed tenancy came to an end.

The Council’s cabinet member for housing says the ‘tenancy for life’ is unfair and antiquated, that it creates ‘disadvantaged communities’, and he described council housing as ‘a welfare benefit in the form of a heavily subsidised house’. He said ‘we want to create neighbourhoods where a broad mix of social households all live side-by-side.’

We will excuse the cabinet member for his ignorance in not knowing that council housing is no longer subsidised, indeed makes a profit. But anyone with experience of some of London’s Tory councils will be sceptical that they want to create broadly mixed neighbourhoods.

Since the days of Lady Porter phrases like that have come to mean selling off homes and estates, gentrification, and getting rid of the poor in favour of higher income groups who might, coincidentally, be more likely to vote Tory. H&F certainly likes selling off estates.

Language and imagery is important in politics. The term ‘bedroom tax’, which so annoys Cameron, is a recent example of winning an argument via a brilliant slogan. ‘Lifetime tenancies’ is an earlier example, invented as an adjunct to the campaign to demonise the poor as undeserving scroungers.

There is of course no such thing as a ‘tenancy for life’, but it has gained such currency that it has entered common usage, even in the Guardian Housing Network. Tenancies with security of tenure are an entirely different concept. A tenant can only stay if they continue to qualify, if they do not breach a wide range of tenancy conditions, if they have not been awarded an introductory or a temporary tenancy in the first place, and if the landlord does not otherwise have a ground for possession.

People opposed to the whole concept of social rented housing used the term to make it seem unreasonable that a tenant should have security, and to give the impression that no-one ever got removed, no matter what they did. Far from it: tenants can be removed for arrears, domestic violence, neglect, misrepresentation, overcrowding, major works, and under-occupation on succession.

We should watch the development of the Dot Branning eviction story with interest. They don’t usually get housing-related stories right on EastEnders. Maybe they will this time. One thing is for certain: as the Government’s policies force more and more tenants into arrears, Dot will not be alone.
Posted by John Gray at Tuesday, March 12, 2013