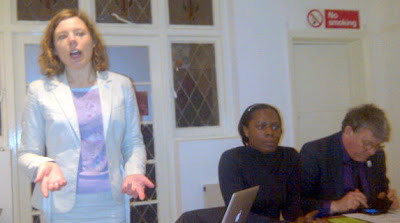 Twitter picture from last week's West Ham Labour Party GC when we had Julianne Marriot from Hacked Off as our guest speaker.

Hacked Off is about "campaigning with victims of press abuse to ensure that the Leveson Inquiry leads to a free & fair press, promoting world-class public interest journalism".

Julianne explained they are not just about phone hacking but about press abuse.  She gave a number of examples of the sorry state that is the modern day UK press. For example some of them will still ring the actor Hugh Grant's  90 year old Dad in middle of night, to try and startle him into saying something and they will pretend to be his son (his Dad also has heart condition).

Major newspapers such as the Sunday Express are not even members of the current voluntary Press Complaints Commission. You need to have an independent regulator underpinned by law. The Government want a "Royal Charter" while the victims of dreadful abuse want statutory regulation of press.

One good thing so far about the debate and controversy about the press is that it has so far stopped further media consolidation.  Final criticism of the Tory Government "Royal Charter" is that it would result in a "modest fee" for arbitration when Leveson made it clear that arbitration should be free.

She is actually a member of West Ham Labour Party and West Ham ward and we had a "discussion" yesterday evening about "Hacked off" and the Libel Reform Bill where I expressed my "concerns" over recent developments. Nuff said.
Posted by John Gray at Friday, March 08, 2013

We need to sort the situation out on the Libel Bill...get it back to the Commons and remove amendments. The bill is too important to loose. Our libel laws are a disgrace.

Look forward to seeing you and Andy on 22nd!