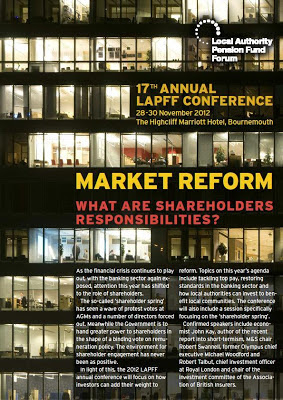 This year's conference theme was "Market Reform: What are the Shareholders responsibilities?"

I was not able to attend the first day of conference but this morning's topics including a panel debate on "Investing in growth - how can local authority pension contribute to the UK economic recovery"; "The Olympus crisis: What can investors learn" by Michael Woodford MBE, ex CEO Olympus (which was very, very good) and closing speech by John Kay, on his review followed by another panel.

I'll try and post on these later (but I have quite a backlog of pension posts to catch up on). You can see my live twitter comments here (29 November).

There is huge change about to hit the £160 billion Local Government Pension Scheme and by implication LAPFF. We have the triennial revaluation of all LGPS funds next year and no doubt the usual suspects will jump up and down about so-called "deficits", even though much of that is down to completely idiotic accounting measures.

The new look LGPS 2014 Scheme will radically change not only the benefits and governance structures but also an enhanced "Fair Deal" for privatised staff and for the first time, a cap on employer contributions.

Not only this but there is also auto enrolment, pressure to merge the 101 different funds, a decline in active members, need to slash costs/improve performance and the various demands (or need?) to invest more (far, far more) in UK infrastructure.

Some people think that the LGPS is the British Sovereign Wealth Fund; others think it is being treated as a cash cow and is being completely and utterly ripped off; quite a few want membership to be opened up to all British workers while some vested interests (of various political persuasions) just want to destroy it.

So there is likely to be a period of profound change ahead. Remember 4 million Brits are members of the LGPS.